Carlton Cuse, an executive producer of ABC's Lost, let slip a big spoiler for the upcoming sixth and final season in his Twitter account today (@CarltonCuse):

Rebecca Mader (Charlotte) is back!

@CarltonCuse: We are very happy to welcome Rebecca Mader back to LOST. Just saw some dailies of her new work. Awesome.

Mader, as fans recall, played the ill-fated English redhead and true love of Jeremy Davies' Daniel Faraday. She succumbed when her head imploded because of the island's time-jumping last season. 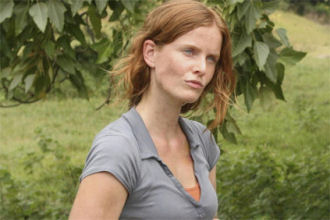 Her return—as well as the previously reported return of such dead characters as Elizabeth Mitchell's Juliet and Dominic Monaghan's Charlie Pace—bolsters the widely held theory that last season's nuclear blast reset the Lost timeline. We'll just have to wait to see how.

Cuse has also been tweeting about the show's progress as it gears up to return in early 2010: