Want to know all about what we have to look forward to in the second half of Syfy's Stargate Universe, which premieres tonight at 9 p.m. ET/PT? More on that in a minute. How about a really big teaser from co-creator and executive producer Brad Wright? (Spoilers ahead!)

While we know that Stargate Universe has been picked up for a second season, during that second season the crew of the Destiny will receive information that will affect them all, Wright told us in an exclusive interview.

"Ultimately what we're going to realize over the course of the series is that Destiny is a very important thing and our [presence] there plays a huge role. It is an important mission that we're on. It's not just a cruise ship. It's not just about getting home. What we're doing is very important. ... It is something we're going to learn over the course of the whole series, the long-term arc. But Rush has believed in it from the beginning."

Rush (Robert Carlyle)? Wasn't he abandoned and left for dead on an alien planet? Well, tune in tonight.

And while info on that mission will be a while in coming, in the meantime we'll get a chance to dig back into the middle of the first season after Stargate Universe's four-month break for a chance to see the fallout from the cliffhanger midseason finale, "Justice," where Col. Young (Louis Ferreira) attacked Dr. Nicholas Rush. Of course, Rush had tried to set him up for murder before that, but still it wasn't exactly a heroic move for Young.

In the last 10 episodes of the first season, which begin tonight, Wright admits, "I don't think I'm giving too much away by saying Rush is coming back." However, he doesn't promise Rush will actually come back tonight, just that he's coming back to the show.

While Wright isn't about to tell us exactly how Rush manages to make it back to the Destiny, "Young suffers the repercussions of his actions. As he should. ... He crossed a line." 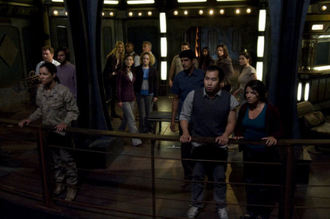 The fascinating Col. Young has been one of the many surprises of the series. "He's this character who is driven by nobility, but pushed beyond it. Pushed to do things that are not him. Not the man he wants to be, at least," he said.

On tonight's midseason premiere, "Space," Col. Young's consciousness ends up in an alien being when things with the communication stones go awry, which results in a standoff between the Destiny and the alien vessel, and with Chloe (Elyse Levesque) trapped in the middle.

While the series has suffered some complaints from previous Stargate series fans about not being action-oriented enough, Wright says, "We took a few risks to bring in some new viewers, but I think if enough of our regular fans stick with us they'll start being more satisfied, too, with Universe. Because they were missing aliens and spaceships and adventure. There is significantly more of that."

According to Wright, the second half of the season was designed from the beginning "for everything to start ramping up and to get more action-oriented. We wanted everybody to know the characters well for the events," he said. "You see, for me, run, jump and action stuff is really only riveting if you really care about the characters and have a relationship with them. We wanted to focus a lot on that. ... I mean, it's still a character-driven show. I'm not suggesting we're not doing character-driven stuff. But I think the pace picks up overall. We meet aliens. I mean, we meet more than one group of aliens, and the intensity of discovery gets higher." 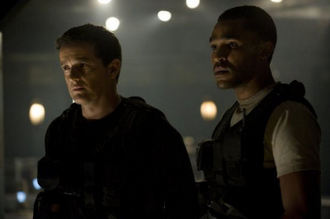 The aliens the Destiny will encounter "were done in the same manner and actually by some of the same people who did District 9. These are full-on CG aliens, still living up to my promise that they're not speaking English or wearing latex. They are very cool. They're not that nice. They've got an agenda. In fact, you've seen two examples of them already, one at the end of 'Air, Part 3.' That little ship that peeled off and flew way belongs to them. The crashed ship belonged to them."

Another intriguing fellow on the series is Col. Telford, played by Lou Diamond Phillips, who will also return to the Destiny. "He comes back. Yes, certainly in a big way, toward the back of the back 10. In fact, the season has been building and there is a big twist, very big twist with his character, which is interesting and fun."