Fox and Lucasfilm are kicking their Phantom Menace-in-3D ad campaign into gear, and, perhaps thinking they can't appeal to geeks' hearts or minds anymore, they're heading right for the gut with a pair of puzzling food-related gimmicks.

This spot for Brisk Iced Tea, featuring Yoda and a Darth Maul who's lost his mojo, is docile enough. The big heads are a little weird, sure, and the idea that a Dark Lord of the Sith can get his Force-groove back thanks to a beverage is a wee bit silly, but it's innocuous. Kids'll dig it.

Oreo built a doomsday vault to protect cookies from an asteroid. No, we're not kidding.
Satisfy your monster-sized hunger with two exclusive recipes from the official Dungeons & Dragons cookbook

But then there's this promotion from a French burger chain called Quick that offers two competing Star Wars-related meals: a Darth Vader burger and a Jedi burger. I can't really make out what the toppings are for the Yoda-related one, but that's not the problem. No, the problem is that the Vader burger comes on a roll that looks infected by the plague. 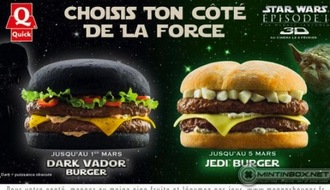 Apparently, that's just a dye at work, and the black bun tastes no different from the normal one. But something tells me that Quick will have enough Vader burgers left at the end of their promotion to feed a Sarlaac.

(via Comic Book Movie and Geekosystem)