In the opening of the final season of ABC's Lost, we got a quick look at Ian Somerhalder's Boone in the "sideways" universe, explaining to Locke that he had to leave his sister, Shannon, behind in Australia. (Spoilers ahead!)

Will we see any more of the lovelorn Boone, who perished in Lost's first season? (Especially now that Somerhalder is a regular cast member on The CW's Vampire Diaries?)

Original final line of The Vampire Diaries was a lot less sentimental
Will Lost's 'Boone' return from the dead?

In a group interview at the Paley Center for Media's presentation of The Vampire Diaries last weekend in Beverly Hills, Calif., Somerhalder said he plans to shoot one more appearance as Sideways Boone before the end of the show. The series finale is getting closer and closer, so when is the flash-sideways to Boone, and with whom does he connect?

"It's in the works," Somerhalder said.

We know from speaking to the Lost team that they are already writing the series finale. If they haven't worked Sideways Boone into a script yet, they must be saving him for the finale, right?

"It's all in the works," was all Somerhalder would reveal. 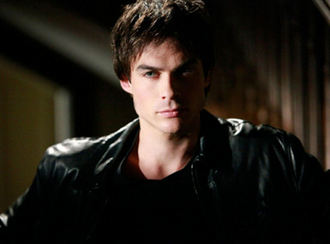 Ian Somerhalder in The Vampire Diaries

There are still have a few more episodes left to film, so it's possible Boone is scripted for the penultimate episode. Somerhalder said that he has every confidence that he'll get to make one more appearance and added that had such a positive experience in his season premiere appearance that he looks forward to one last cameo.

"Last time was a blast," he said. "Next time will probably be even better. It was fun. It was a really good time."