Brannon Braga, the onetime Star Trek executive producer, says that his ABC sci-fi pilot Flash Forward—in which the Earth's inhabitants have a simultaneous glimpse of their futures, then must live with the consequences—is designed to reset itself each season, starting with a new flash and ending when the premonitions come true.

"Yeah, the structure's not dissimilar from 24 [on which Braga is a co-executive producer], and we want to reset the show at the end of each year, where we'll do another flash forward at the end of the first season, and then potentially another flash forward at the end of the second season, each one kind of resetting the core characters' visions of the future and introducing new characters," Braga said in an exclusive interview on Tuesday, Dec. 6, at the Hollywood premiere party for 24's seventh season, which kicks off this weekend.

Braga—who developed Flash Forward with producer/writer/director David Goyer and Goyer's wife and producing partner, Jessika Borsiczky Goyer—adds: "One of the cool things about the show is you have 5 billion potential storylines. And we plan to tell the stories of people all over the world. Obviously they'll be focused on mainly people here in L.A., but we're going to go all over the place."

The pilot follows a group of characters around the world who have to deal with the consequences of a 2-minute, 17-second glimpse into the future. The series is loosely based on Robert J. Sawyer's novel Flashforward.

"The core concept is very much the same as Robert Sawyer's novel," Braga says. "That was the impetus for it and the idea of the entire world blacking out at the same time for a discrete amount of time, and everybody on Earth having mysterious visions of the future. Same idea. Obviously, to do a TV show, you have to sustain potentially—and God willing—100 episodes or more; you've got to change the concept a little bit. His novel had people having visions of the future 20 years from now. We change that to five months from now and kind of narrowed down the scope a little bit and made it a little bit more of an intimate epic. But essentially the concept is the same."

The show features an ensemble cast, led by Joseph Fiennes, Sonya Walger, John Cho, Christine Woods, Jack Davenport and Courtney B. Vance, and is envisioned as a companion to Lost. Goyer directs the one-hour pilot, which goes into production in February in Los Angeles.

This story continues below the image. 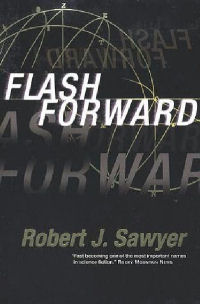 "We just finished casting the pilot right before the holiday, and we just went into ... official prep on it two days ago, so David is busy getting ready to direct, and we're going to shoot it next month, right after President's Day," Braga says.

How will Flash Forward compare with Goyer/Braga's last TV collaboration, the short-lived but critically praised Threshold? "Just based on what David and I have been talking about, this'll be more grounded," Braga says. "Threshold, I think, had a slightly more heightened reality to it. ... Our aim with this show is to make it more—to say believable would belittle shows like Threshold or Star Trek—but just more relatable and more realistic. There's one big science fiction conceit: these flash-forwards. That's all there is, and so we want the show to have a naturalistic vibe to it."

The show also has a long-term vision, Braga says. "It's so early in the game, [but] we have a lot planned," he says. "We have a lot we want to do. Before we sold the show, we sat down, and we were like, 'This is a big idea. We want to have as much as we can planned for the duration of the show in case it does go. We don't want to be winging it.'"