Bryan Fuller, creator of ABC's canceled fantasy series Pushing Daisies, gave SCI FI Wire a preview of the last three episodes and added that the story may continue in a comic-book series from Marvel.

The series, which charmed critics and fans alike, will also be showcased at the 2009 Paley Festival in Hollywood on Sunday.

We spoke exclusively with Fuller about Daisies' early demise and its continuing adventures. The following Q&A is an edited version of our interview. The show's final episodes will air on three consecutive Saturdays, starting May 30, at 10 p.m. ET/PT. It will land on DVD on July 21.

Initially, Pushing Daisies was this critically hailed, Emmy-nominated series with strong ratings. A year later, the series didn't even get a full season. What went wrong?

The other problem was our timeslot wasn't good, since we didn't have a lead-in. When we aired at 9 p.m., we went up by 3 million viewers, which was really dramatic. ABC refused to move us from the 8:00 timeslot, which had worked previously the season before, but after the writers' strike and the erosion of the audience, it wasn't sustainable, so we asked them to move us repeatedly. We would have even taken Friday night at 9 p.m., because people don't watch TV earlier. All the Nielsen ratings indicate people start watching TV at 8:30. That was a big indication, but I certainly don't think the quality of the show went down. If anything, it got stronger and clearer.

When this run was coming to an end, were you concerned the remaining three episodes would never even air?

Fuller: We're doing the Paley Festival in April, where we'll be screening the last few episodes. It sold out within 20 minutes of tickets going on sale. The thing is, with Pushing Daisies, Wonderfalls and Dead Like Me, there's always been a dedicated audience base, which is how I measure the shows' successes. That, to me, is so satisfying, which is why when Pushing Daisies got canceled, I knew we had 22 episodes I was very proud of that were meticulously produced, well written, and how many shows can say that? I walk away with more pride than disappointment.

Can you preview the remaining episodes?

Fuller: There's three episodes, and it's a very interesting challenge, because we had just done a Chuck [Anna Friel] and Ned [Lee Pace] arc with Chuck's dad coming back to life and how it affected their relationships. We realized we needed to do Olive, Emerson [Chi McBride] and aunts-centric episodes. The Olive episode is sort of an unofficial sequel to "Savannah Smiles," where if Olive was Savannah instead and got kidnapped when she was a child by a couple of bumbling thieves, and they accidentally took her as opposed to on purpose. Now, they've escaped prison and she helps them. Aaron Harberts and Gretchen Berg, who wrote the nunnery episode "Bad Habits," originally had Olive getting kidnapped and being a high-profile kidnap case, but the network felt it was way too dark. We've been kicking this around since episode three, and it was a great way to highlight Kristin [Chenoweth].

Episode 12 is about Emerson coming face to face with his baby mama. She is a murder suspect, and he has to prove her innocence in order to see his daughter. That was when we were getting the indication that 13 might be our last. So it was "How are we going to make this a series finale when we had all this stuff with pocket watches and Ned and Chuck's fathers?" It took a nine-episode arc to flesh out all these stories, and if we crushed them into one episode it would have been unsatisfying. It became "What story in the series can we wrap up and put a bow on in the parameters of one episode?" It was really about the aunts [Ellen Greene and Swoosie Kurtz] and their relationship to Chuck. For Ned and Chuck, there is no way to wrap up their story in one episode, because we would leave the audience on such a kitchen-sink note. For me, Chuck and Ned go beyond the 13 episodes. We are talking with Marvel Comics right now about a Pushing Daisies series that will essentially cover the back nine episodes. It features Chuck and Ned's fathers as well as fortifying Chuck and Ned's relationships after we shake it up. 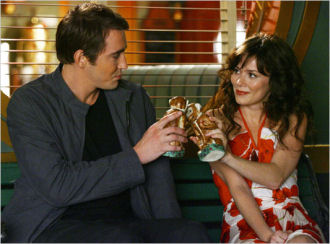 If you had been given enough notice, how would these last few episodes have played out differently?

Fuller: If I had known in advance, I would have done an episode that started two days before Chuck died and brought us full circle to the present. In order to do that, there was stuff we had to set up in episodes that we didn't, because we didn't know about being canceled.

For the comic book, have you nailed down a creative team?

Fuller: I am going to pull together the Pushing Daisies writing staff. It will be run like a writer's room, where I will write the first story, and we will arc out the other issues, which will comprise what we were going to do in the back nine. We'll also make it accessible for those who are not familiar with the TV series, as well as introducing villains we couldn't do on ABC. There is a villain from the Comic-Con preview comic about a guy who got his head cut off. Ned touched it to get some answers; the body came alive too and proceeded to grab his head and get away. We definitely want Head to come back as a big villain.

Do you have any artists lined up?

Fuller: I love Tim Sale. He's such a nice guy, and I have a really good relationship with him, so I'm hoping he'll be able to work with us. His art is so specific and has an interesting point of view, specifically with The Long Halloween. That was such a perfect melding of comic-book writer and artist, so I'd love to do something like that.

Is the comic book considered season 2.5, then?

Fuller: In many respects, it's probably season three. We're going to see a lot of exploration with Ned and his father, which we teased but were never able to make good on. We had George Hamilton save Ned and Chuck, and by having Emerson and Dwight Dixon clean up the whole mess we're going to understand who Dwight was to Chuck and Ned's dad. Dwight will be making a return, and we'll be seeing the adult Eugene Mulchandani and Danny that involves helium smuggling. There's a lot of fun stuff woven into the series that we were intending to pay off that we can now do in the comic-book series. The fans of the show will see a lot of stuff come to fruition, but new fans will have a greater appreciation, too. Since it's Marvel, I would also love for the Pie Maker to touch Captain America.

When can people expect to see that out on the stands?

How Hannibal pushed network TV sex scene boundaries
Bryan Fuller: How Pushing Daisies ends—and how it was supposed to end

Fuller: We are currently negotiating with Warner Brothers to get the comic-book rights, and if they clear it in the next month or so we would hit the ground running immediately to get the issues out. Our first issue could premiere in the fall.