Why Predators is the sequel we've been dying for

Deep in the jungles of Austin, Texas, the Predators are readying for the hunt. Yes, I said Texas. When Predators hits screens this summer, few audience members will ever guess that the bulk of the film was shot in Texas, and during winter to boot.

If producer Robert Rodriguez and company have done their job properly, the sequel film—shot just outside Austin at Troublemaker Studios—will feature a homegrown jungle largely indistinguishable from the locales of the original classic 1987 Arnold Schwarzenegger movie Predator, which shot in Puerto Vallarta, Mexico.

Predators picks up where the original movie left off, as if Predators 2 and the Alien vs. Predator films never happened. Although the project is very close to Rodriguez's heart, he is serving in more of an overseer role as producer. He hands off the directorial reins to Nimrod Antal, a strong vote of confidence for the young director, especially considering the scope of Predators, the largest undertaking yet for Troublemaker. (Spoilers ahead! Click on the thumbnail images for larger versions.)

The setting is a game-hunting planet where Predators sharpen their skills as the top of the galaxy's food chain. Eight of the best human killers have been gathered for the hunt and set loose in a low-odds game of survival.

Leading the pack is Adrien Brody as a mercenary named Royce. Topher Grace joins as Edwin, a disgraced physician with a secret; Walton Goggins is Stands, a serial killer on death row; Danny Trejo is Cuchillo, a Mexican drug cartel enforcer; Oleg Taktarov is Nikolai, a former Russian commando; Mahershalalhashbaz Ali is Mombasa, a death-squad officer from Sierra Leone; Louis Ozawa Changchien is Hanzo, a Yakuza hit man; and Alice Braga is Isabelle, a black-ops sniper. Laurence Fishburne plays the mysterious Noland, a Yoda-like a soothsayer who has managed to stay alive on the hunting planet for years.

SCI FI Wire was invited to tour the production in late December 2009. When we arrive, we are led into the makeshift jungle that will see the bulk of the film's carnage. Skulls have been piled in pyramid formations, and human skin is stretched across trees like laundry. A Predator skull sits atop a large metal barred cage. Splattered blood and discarded body parts complete the decor.

The project is a longtime dream come true for Rodriguez, who first wrote a draft of the project 15 years ago. "I wanted it to kind of emulate the first movie and go back to a jungle setting, so I put it on a different planet," Rodriguez tells a group of reporters. "The title Predators is supposed to have a double meaning. Are they the predators, or are the creatures the predators?"

The producer admits he kind of burned himself by setting the bar so high on his original script. "I was hired only as a writer back then," Rodriguez said with a laugh. "It had [Schwarzenegger's character] Dutch still in it. Knowing I wouldn't have to direct it, I wrote all kinds of stuff in there that was impossible to do. It was 1994. It was like, 'Hey, good luck figuring this out.' Late last year, Fox came back and said, 'We wanted to reboot the franchise, and we looked up your old script and we thought, 'This is great.' So suddenly that became my problem."

Though scheduling conflicts ultimately forced Rodriguez to hand off the directorial duties, he found a kindred spirit in Antal, a fellow Predator fanatic. "We just met him, and he's a great guy and you could feel that he could be really great with cast and crew," says Rodriguez.

Greg Nicotero stops by with suit actor Kerry Jones, who joins us in full costume. Even on the set, there's something more than a little unsettling about standing in front of a giant Predator armed with only a digital recorder. Jones is one of the Super Predators, part of the elite best-of-the-best hunting group.

The sleek, quick and intimidating Black Predator is the leader of the Super Predators, also known as "Bezerkers" on set. There's also the Falconer, who can launch a Falcon from his helmet to hunt from the sky. Finally, we have the Dog Handler, who tracks with the help of a doglike creature (imagine a Rottweiler on steroids). The classic Predator will also appear in the film with a few subtle modifications. Fans should be relieved to learn that the bulk of the Predator appearances will be actors in suits rather than CGI. 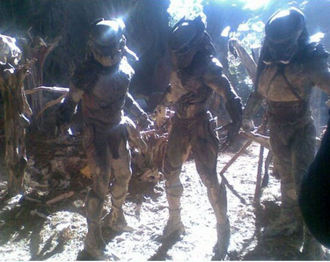 Beyond the big effects and elaborate sets, Antal has the added challenge of balancing a large ensemble cast that even boasts an Academy Award winner, The Pianist's Brody. "We tried to go against the grain," Antal says. "We are not trying to remake or copy the original film. We are trying to further that world. I told everybody early on that I can make anybody look tough. What I can't do is teach them how to act."

Though few would dispute the acting chops of Brody and Grace, they bear little resemblance to the WWE-like ensemble of the original. "If you open up the newspaper and you see any of the myriad images of G.I.s today, they're more my build than anything," says Brody with a smile, convincing in his dirt-covered military apparel. "The important thing for me is to put on a little size and to feel strong enough to handle myself."

"I've been singing this song from Schoolhouse Rock, 'One of these things is not like the other,'" says a playful Topher Grace. "Edwin is very different than everyone else in it. You're supposed to wonder why he was chosen when all these other similar types were selected. My character operates on a number of different levels."

When asked about Brody's characteristic thin build, Antal chuckles and cocks an eyebrow. "Ask him to take his shirt off. He'll blow you guys away!" While he didn't exactly disrobe, Brody does say with a laugh that he's got "At least a six-pack. Hey, if I can't come with that physicality [I wouldn't be doing my job]. I have a bit of a responsibility to do that."

Goggins, who plays a convicted serial killer, says the casting of Brody as a badass is perfect for today's audience. "I think that where we've come as a culture, we want to see ourselves reflected in our heroes. Unfortunately, most of us don't look like Arnold Schwarzenegger. We look somewhere between Adrien Brody and John Goodman, you know?"

Trejo adds, "I know Arnold was great with his muscles, but Adrien just blows him out of the water with his mind. I watched him act, and just even when he's acting you can almost hear his brain, just doing what he's supposed to be doing. He's a fabulous actor."

It's a nice change of pace for Brody, from playing the piano in The Pianist to going head-to-head with hulking stuntmen in full Predator regalia. "It's very exciting," he says. "I mean, it's pretty bitchin'. I was sitting with this Predator on a totem pole, and we're in this kind of horrific environment, the camp that we're shooting in. Once it's done up and things are burning and carcasses are hanging, it is hell. It is hell. I looked around, and I was like, 'Wow, this is hell. This is what hell would look like.' And I'm interacting with the Predator. It was a dreamlike moment, because it was so surreal that I was in this situation with something that I grew up with [in the movies], you know? It had such a significance." 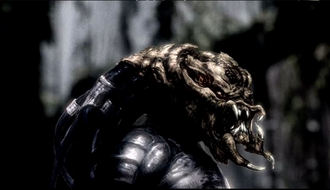 So what's the difference between a Super Predator and the classic Predator? Nicotero can answer that: "There is a different design for the face and the bodies with the classic Predator. The armor is blocky, and we matched a lot of stuff. The actor who is playing that is Derek Mears [Jason Voorhees in last year's Friday the 13th]. He is about 6 foot 3, he has done a lot of super work, and we have worked with him quite a bit. With the Super Predators, we are using actors that are 6 foot 8. They are a lot taller and a lot leaner. Nimrod, when we first started the project, used a really great analogy: He said the classic Predator is a cassette tape and the new Predators are the iPod version. So that triggered a lot of visual things in my head, in terms of making them taller, making them sleek and keeping the armor really close to the body. So that they are not bulky, because we wanted to get the idea that they are fast, and that they're elegant and that they are efficient."

Nicotero added: "Even in terms of stuff like the dreadlocks, the classic Predator [has] that kind of Rasta look, but we swept all the dreadlocks back. We made the face a lot longer. We just wanted everything about him to look more elegant, like a black widow. We wanted it to be deadly-looking."

When Predators hits screens this July, Rodriguez and Antal hope to recapture the fun and intense action of the original while washing away the bad taste left by the arguably subpar sequels and spinoffs that have come since. This is Predators by fans, for fans. "Everybody knows what this movie should be," Rodriguez tells press. "It should top all those other ones that we had before it and feel fresh, feel new for a new generation, because the character is totally classic. It's really coming out terrific."