We've been getting the stars to reveal secrets about Joss Whedon and Drew Goddard's upcoming The Cabin in the Woods (spoilers ahead!), including Amy Acker's admission last week that it's a creature feature.

Now co-star Fran Kranz suggested that there's a lot more than one type of monster in the film. "It's got a lot of different scary things," Kranz said in an exclusive interview on Sunday in Los Angeles, where he presented at the Streamy Awards. "How many different monsters are out there in the woods?"

Whedon has used phrases like "game changer" to describe the film. Kranz explained a little bit more about how the film comments on the genre of "cabin in the woods" horror. (Whedon produces and co-wrote the movie with director Goddard.)

"All I know is that at one point I read somewhere that Joss said it was the horror film to end all horror films," Kranz said. "I like that. I think that puts it best. Those are high expectations, but it's pretty out there. It goes for it. It really goes for it, so if it's successful, then I think people will have trouble following in his footsteps." 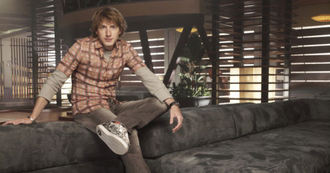 Kranz—who, like Acker, starred in Whedon's Dollhouse—added that The Cabin in the Woods has two different components: There are the kids in the cabin, but also a group of adults (Richard Jenkins, Bradley Whitford and Acker) in a separate subplot.

"It was like two totally different movies," Kranz said. "The way it was shot or just the scheduling of the filming, I was sort of around. There was about a couple months with all the kids, and then there was about a month or so with the adults. I had a little extra to do, so I was in Vancouver while they were doing that. If you went on set, it was like a totally different movie. It had a whole different feel to it."

The film is complete, and MGM is converting the movie into 3-D. "I know people that have seen it, and it's always a very good response," Kranz said. "I know that they've finished it. I know that they locked picture. I got an e-mail from Drew recently. Everyone's very excited about it. I hear really good things. The script was so cool that it'd be hard to mess up."