Twenty-nine years ago, actor Terence Stamp sauntered onto the screen in Superman II as the embodiment of Superman's nemesis, General Zod from Krypton, and an iconic villain was born. (And, yes, we know he appeared in the first Superman, but that was only the briefest of cameos.)

To this day his trademark line of "Kneel before Zod!" remains a potent pop-culture catchphrase, while Stamp's performance is still widely considered the seminal take on the character. So you can understand why actor Callum Blue (Dead Like Me, The Tudors), who takes on the role of Zod for the ninth season of The CW's Smallville, is just a wee bit nervous. (Many spoilers ahead!)

"When I first discovered I was playing him, it was a bit overwhelming," Blue admitted in a small group interview last week, where he was promoting the series at San Diego Comic-Con. "But then I decided that you can't think about the iconic status of the character. He's a person. All I want to do is be truthful with him and see how the character evolves. We want to do a different take on him anyway ... " Blue then laughed and joked, "Forget that, I'm just going to rip Terence Stamp off."

The British-born actor has been quite busy the last few years, guest-starring on several U.S. television series, and genre fans easily recognize him as Mason the grim reaper from Dead Like Me. Although admittedly unfamiliar with Smallville before he was cast, Blue says he's a fan of the original Superman films.

"I saw it as a kid, and I just watched it recently," the actor said. "People actually say that [Terence] and I have similar voices. We have the same manager as well, and I had a little message from him wishing me luck in that voice." 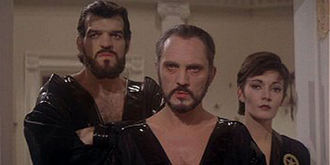 Terence Stamp (center) as General Zod, between Jack O'Halloran as Non and Sarah Douglas as Ursa in Superman II

In the meantime, production has already started on Smallville in Vancouver, so Blue is spending his free time catching up on past episodes. With the tone of the show fresh in his mind, he said he is ready to honor Stamp's portrayal of Zod while giving the dictator a fresh spin due to some distinct character changes.

"First of all, he's Major Zod at the moment, so he hasn't grown into General Zod," Blue revealed. "I want to make him a bit more manic. The Terence Stamp version is very cool, calm and collected. There is a level there. I have a certain amount of that, but I think he hasn't grown into it yet, so my take is that he has to calm down a bit, because he wants it right now. It's a bit of a spoiled-brat version of the character. He's very aristocratic, but he hasn't calmed into it yet, so that's a journey I can take with that character."

He continued, "In the first episode, he is the leader of a fascist party, so I have been watching a lot of Hitler, because he is very charismatic, and I want the character to be charismatic. The very interesting thing is that his army turns against him, and he's got to work to get them back on his side. He has to manipulate and kill a couple people to get that to happen. He's not as confident as the character is going to be in the future."

Perhaps the most interesting detail is that Major Zod is not the future Zod of the films. "I am not aware of Clark's existence yet, but I have just discovered that Jor-El has expired," the actor said of his character's place in the mythology timeline. "We are exploring their history because they were friends and something went down. But I don't know about Clark or how I will react to him. Here's the confusing part: [Stamp] is the future Zod. I haven't yet blown up Krypton. I come from the past as the younger version of Zod, so none of that has happened yet. I haven't come from the Phantom Zone, I have come from Krypton."

That fact alone opens up myriad possibilities for Major Zod, like whether the despot-in-training's actions in the present could deeply affect Clark's own future—or even his existence, if Krypton is perhaps prevented from blowing up. Or perhaps Zod's relationship with Clark in the present could change his hostility toward Jor-El and his entire family tree? Blue smiled at the theories and said only, "I'm not allowed to say. They are going to explore their history for sure, and there are a lot of possibilities. All I know is that he is here, he doesn't know why he is here, and he hasn't got his powers yet, so he is confused. His army is against him, so he is laying low. But he knows what he wants, which is everybody to kneel before him!" Smallville returns Sept. 25 on The CW.