Chrono-Displacement Disorder doesn't stand a chance in the face of true love—or does it?

That's the central question in The Time Traveler's Wife, the upcoming big-screen adaptation of Audrey Niffenegger's best-selling novel. The story follows the story of Clare (Rachel McAdams) and Henry (Eric Bana). She's loved him her entire life, ever since she was a child, but he's afflicted with Chrono-Displacement Disorder, which makes him an involuntary time traveler. Now she's of a similar age, but Henry's knack for disappearing at the most inopportune times leads to much heartbreak.

Bana (Star Trek) and McAdams (Sherlock Holmes) mused about the concept of "true love" as they talked together during a group interview with reporters over the weekend in New York. (The Time Traveler's Wife opens on Aug. 14.)

"I think there's a definite choice being made between these two characters," McAdams said. "I think they choose to be together every day. I think they could walk away, and when Clare says she doesn't have a choice, in that moment I think it's out of frustration. But I think she genuinely means that this is the man she loves, and it's chemistry, and it's alchemy, and that whatever your challenges are, you make it work somehow, and that she really wouldn't have it any other way. You could be with a man who doesn't have Chrono-Displacement Disorder and have some kind of other problem." 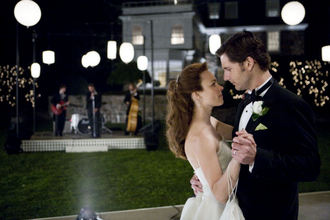 "I love the fact that you have a mixture of the thing that usually sends people crazy, which is unrequited love, mixed in with a couple that is actually together and had real and present love," he said. "I hadn't ever seen a story with those two elements combined. And I have no idea exactly why so many people go so crazy over the book in different ways and connect with it so deeply, and it's different for every person. But I know, for me, one of the things was that. It's almost like a mixture of two themes, where you do have a present couple who are living and loving, and then on the other side you have two people who can't be together. I was really intrigued by that."

Meanwhile, there's the film's sci-fi hook—and its inherent metaphors—to consider. The time-travel element heightens the stakes,and it transforms the love story into a fantasy love story.

"It's something I think we both deal with as actors; it's separation, it's falling off the face of the earth, sometimes to the other side of it," McAdams said. "I think it's this thing that tears you away from the people you love, and I think that's something that's fairly relatable."

Bana leaned in and said, "It's also that thing about synchronicity. For anyone who's in a relationship, if you imagine you're with your partner today, if your partner met another version of you today that was like the 10-years-previous model, that's not quite as good and not quite as well sorted, would you even be together?"

Bana added, "I love those moments between Henry and Clare where the tables are turned and Clare has the upper hand because she knows so much about older Henry, and here's a young Henry. There's a lot of really interesting things there about how much we evolve as people."