Universal Studios Home Entertainment announced that Caprica, the prequel to Battlestar Galactica, will drop exclusively on DVD on April 21 as a two-hour movie and precursor to the SCI FI series. The company also unveiled new cover art for the DVD and a few new stills.

The DVD will feature a limited-edition uncut and unrated version of the pilot movie before the series' broadcast premiere on SCI FI Channel in 2010. Caprica is executive-produced by Ronald D. Moore and David Eick and Remi Aubuchon.

Bonus features will take viewers behind the scenes of the creation of Caprica and include commentary with director Jeffrey Reiner, Moore and Eick; deleted scenes; video blogs; and the featurettes "What the Frak Is Caprica?" "The Director's Process," "The V Club" and "The Birth of a Cylon."

Set over 50 years before the events of Battlestar Galactica, Caprica depicts a world at the peak of its power, grappling with new science and technologies and the issues they create. The series stars Eric Stoltz, Esai Morales, Paula Malcomson and Polly Walker. 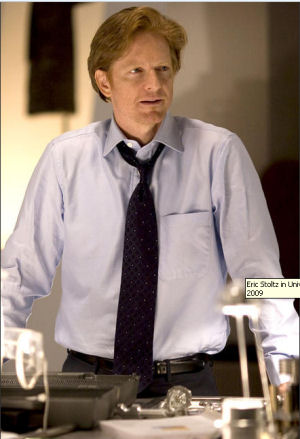 Universal Cable Productions will begin production on the Caprica series in the summer in Vancouver, Canada, for a 2010 television premiere. The DVD of Caprica will carry a suggested retail price of $26.98.