Captain America's creator reveals how he invented the Red Skull

It seems amazing that it's been 70 years since Captain America first appeared in comics, but what's even more amazing is that Joe Simon, who along with Jack Kirby created that hero, is still around at age 97—and he's just published an autobiography letting us know how that hero came to be, and a whole lot more! 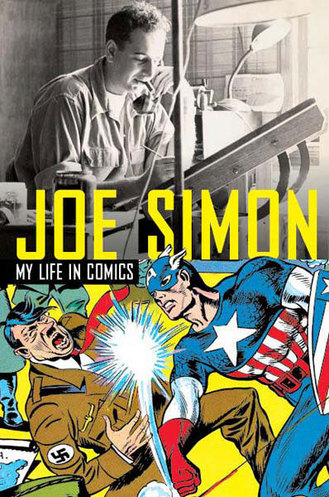 One of the many fascinating anecdotes in his autobiography My Life in Comics, out this week, describes how he came up with Captain America's greatest villain:

Now we needed a villain for inside the comic, too. ... Even sitting at lunch, I was always thinking about heroes and villains, with all sorts of ideas swimming around in my head. Next thing I know, I had a hot fudge sundae sitting in front of me, with the vanilla ice cream, and the hot fudge is running down the side. It was intriguing.

The hot fudge looked like limbs—legs, feet, and hands—and I'm thinking to myself.

Gee, this'd make an interesting villain, I mused. We'll call him Hot Fudge ... Just put a face on him, and have him ooze all over the place.

You have to be stupid to be in this business. Nevertheless, I did some sketches, right then and there. And I Iooked at them.

Nah, I thought. Who would believe anything like that?

But I looked again at the sundae, and I saw the big cherry on top. The cherry looked like a skull.

Be sure to track down Joe SImon's My Life in Comics for even more Golden Age secrets.