Back in the 1960s, The Avengers—with Patrick Macnee as John Steed and Diana Rigg as Mrs. Emma Peel—was one of the sexiest TV shows on the air. One particular episode was so racy that it was edited for broadcast in the USA ... but its raciness still managed to invade Marvel's groundbreaking mutant comic.

In issue #132 of Uncanny X-Men, Jean Grey—flush with her stunning new Phoenix powers—gets brainwashed and forced to join the Hellfire Club. Writer Chris Claremont and John Byrne decided that, as the new Black Queen (to mirror Emma Frost's White Queen), they would give Miss Grey an edgier look. 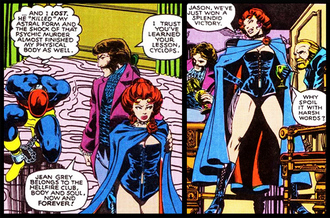 Claremont has admitted that the Hellfire Club itself, as well as this sort of dominatrix-lite costume, was heavily influenced by the Avengers episode "A Touch of Brimstone," in which Mrs. Peel is kidnapped and brainwashed and turned into the Queen of Sin.

The reason why this sequence was kept from '60s-era American viewers is the same reason it eventually made such an impression on the X-Men masterminds: It's just too damned hot.