Ever find yourself watching a movie or TV show featuring a beautiful female scientist character only to think, "She's no scientist"? Us too! Only once we thought about it further, we realized that some of those scientists were hot and plausible, some were neither, and most fell somewhere in between.

In honor of tonight's second-season premiere of Sanctuary (10 p.m. ET/PT on Syfy), starring Amanda Tapping as Dr. Helen Magnus, we put together this chart, in which we rate sci-fi's sexy scientists by their hotness vs. their plausibility.

Click below to view the chart at a more readable size. 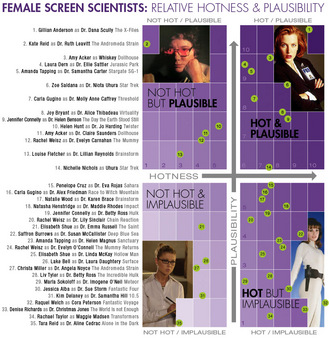