We still have a few months to wait for Guillermo del Toro's monsters vs. robots epic Pacific Rim, but del Toro and company are keeping us busy in the meantime with loads of cool promo material. A new poster for the flick just hit New York Comic-Con, and it's got us ready for war.

The poster, designed by artist Raul Monge, takes the futuristic supersized robots of the flick and places them in a retro context designed to evoke World War II.

"Raúl is one of my top concept designers," del Toro said. "The idea with this particular piece was to emulate an old WWII propaganda poster/flyer that went along with the world we were creating. It symbolizes rationing - voluntary work force, no guts, no glory kind of heroism."

Check out the full image: 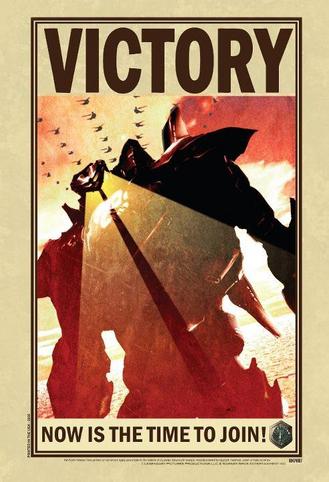 The post will be officially unveiled at the Legendary Pictures NYCC panel tomorrow at 5:15 p.m. But before that, you can get del Toro to sign one for you at the Legendary booth beginning at 2 p.m.

But wait, there's more! Legendary has also announced that a three-part graphic novel that will serve as a prequel to the flick, written by screenwriter Travis Beacham, is headed our way soon.

When legions of monstrous creatures, known as Kaiju, started rising from the sea, a war began that would take millions of lives and consume humanity's resources for years on end. To combat the giant Kaiju, a special type of weapon was devised: massive robots, called Jaegers, which are controlled simultaneously by two pilots whose minds are locked in a neural bridge. But even the Jaegers are proving nearly defenseless in the face of the relentless Kaiju. On the verge of defeat, the forces defending mankind have no choice but to turn to two unlikely heroes--a washed-up former pilot (Charlie Hunnam) and an untested trainee (Rinko Kikuchi)--who are teamed to drive a legendary but seemingly obsolete Jaeger from the past. Together, they stand as mankind's last hope against the mounting apocalypse