The new pics come courtesy of a young actress named Anjini Azhar, who plays the daughter of Noel Clarke's (Doctor Who, Centurion) as-yet-unnamed character in the Star Trek sequel.

The pic below features the young actress with Clark, and the other is with Nazneen Contractor, who plays her mother. 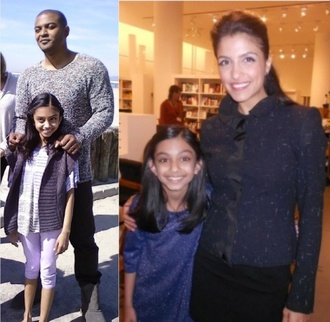 But the most interesting one is definitely the pic (up top) the young actress took with actors Simon Pegg (Scotty) and Anton Yelchin (Chekov). As you can see, the two actors are sporting a new kind of Starfleet dress uniform. Although similar to the gray dress uniforms we saw in the 2009 film, the new uniforms have a few different things going for them; a different color, the cut, the epaulettes and, of course, the hat.

So, what do you guys think of the new Starfleet uniforms? Is it a thumbs up, or a thumbs down?

(via SFX and Trek Movie)