Baby, it's cold outside ... especially in this chilly first glimpse from Disney's latest feature animation project, due out next year. Bundle up and come inside, before you freeze!

This is the first official concept-art image for the Mouse House's retelling of the classic Hans Christian Andersen fable The Snow Queen. Some earlier pieces were leaked in October from Disney's D23 convention and swiftly taken down, but this is a director-approved peek at Frozen.

The best Ralph Breaks the Internet cameo has nothing to do with Princesses or Disney
Baymax! the series bounding to Disney+, ‘Encanto’ revealed as next Disney animated film

The icy fantasy film is directed by Tarzan's Chris Buck, written by Wreck-It-Ralph's Jennifer Lee and produced by Peter Del Vecho (Winnie the Pooh, The Princess and the Frog). 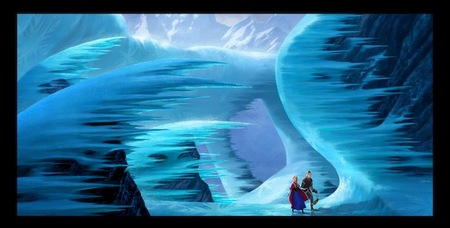 From the studio behind 2010's Tangled and this year's Wreck-It Ralph, Walt Disney Animation Studios presents Frozen, the coolest comedy-adventure ever to hit the big screen. When a prophecy traps a kingdom in eternal winter, Anna (voice of Kristen Bell), a fearless optimist, teams up with extreme mountain man Kristoff and his sidekick reindeer Sven on an epic journey to find Anna's sister Elsa (voice of Idina Menzel), the Snow Queen, and put an end to her icy spell. Encountering mystical trolls, a funny snowman named Olaf, Everest-like extremes and magic at every turn, Anna and Kristoff battle the elements in a race to save the kingdom from destruction.