Battlestar Galactica's Kandyse McClure (Dualla) may have wrapped that series, but she returns to SCI FI Channel as the leading lady in the upcoming original movie Children of the Corn.

A remake/re-imagining of the original film, which was based on the Stephen King short story, Children of the Corn stars McClure as Vicky and David Anders (Heroes) as Burt, a couple at a marital crossroads who wind up driving into the middle of nowhere only to encounter some deeply strange and deadly kids out there among the corn rows.

The movie, written and directed by Donald P. Borchers (who produced the original film), will premiere later this year on SCI FI. SCI FI Wire recently spoke with McClure about the project, and the following are edited excerpts from that exclusive interview.

Had you seen the original movie, or did you watch it once you landed this job?

McClure: It wasn't part of my childhood experience, certainly. When I got the script, I did go out and find it and watch it, just so that I had some kind of reference point. And I knew that the script we were going to be shooting was going to favor more the Stephen King story and less the 1984 version. So I did want to know where those differences were going to lie. But I did watch it, and it was creepy. I can imagine how creepy it was in 1984.

What interested you about Vicky as a character, as an acting challenge?

McClure: I got to play this woman, this disappointed and for the most part infuriated woman. But she's really just scared, scared of love. It was so different from being on Battlestar. Here I was in this ridiculously short dress, which I'm hoping will be a favorite because I picked it. And I got to be pretty. And I got to be feminine. And I got to be kind of obnoxious. So it was a lot of fun. 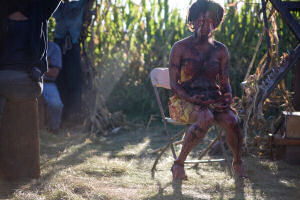 McClure: Well, violent ..., I don't actually think it's going to be that violent, in terms of what you actually see happening, kind of graphic violence. I think we're trying for the psychological thriller, for the implied violence. It is pretty gory. I have to say there's a lot of blood. There's definitely a lot of blood. But the stuff with the kids is really what creeps me out. It creeped me out watching it on set, and I imagine after they've rendered and doctored it and put the music in that it'll be even more disturbing. But there is a lot of gore. Not so much as the Saws or The Texas Chainsaw Massacres, but for Children of the Corn there was a lot of fake blood on set.

Children of the Corn will no doubt be released on DVD after it's aired on SCI FI. Did you shoot more intense alternate versions of some of the money shots, so that they can be included as part of an R-rated or even unrated DVD version?

McClure: As far as I know, I think that was the plan. Donald had spoken about a possible overseas theatrical release. So there were certain shots that, yeah, there was the Disney version—the TV version—and the theatrical version of what it was going to be.

The original film spawned about 92 sequels. How open would you be to returning as Vicky in a series of follow-ups?

McClure: Is it OK if I say not so much? You know what? Maybe one sequel. The only place I could go would be to be a zombie, but then it would be a zombie movie. But I've seen some good zombie movies. I watched Planet Terror recently, and there's always Dawn of the Dead. It's a classic genre, but I don't know how good I'd be as a zombie. I'm not sure.