The Dark Knight director Christopher Nolan, who will "godfather" a new film version of Superman, is speaking for the first time about the project, remaining coy about some details and offering up his take on the venerable franchise. He also confirmed that Dark Knight story guy David S. Goyer will be drafting the script.

"It's very exciting, we have a fantastic story," Christopher Nolan said while sipping tea in the sleek editing suite that fills the converted garage adjacent to his Hollywood home. "And we feel we can do it right. We know the milieu, if you will, we know the genre and how to get it done right." ...

The Internet flurry that included reports that, according to [Nolan's wife and producer, Emma] Thomas, might be better described as fan fiction. The dispatches revealing that the film will be called "Man of Steel" ? and feature Lex Luthor and Brainiac? Or the one about it being a period piece with something like a low-fi version of the hero?

"I don't know where this stuff comes from," Thomas said with a chuckle, although, as with any good poker player, it's hard to say where the bluff starts and ends. ... 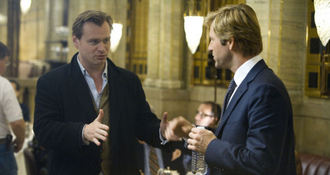 Nolan wouldn't say who will direct, though speculation centers on his brother and collaborator, Jonathan Nolan.

Nolan added, though, that this new movie will stand on its own.

"A lot of people have approached Superman in a lot of different ways. I only know the way that has worked for us that's what I know how to do," Nolan said, emphasizing the idea that Batman exists in a world where he is the only superhero and a similar approach to the Man of Steel would assure the integrity needed for the film. "Each serves to the internal logic of the story. They have nothing to do with each other."

Still, it was a frustrating moment in the Batman franchise that led to this new Superman revival. Nolan and Goyer, a key collaborator on both Batman films, were at a story impasse on the third Batman film (which is now picking up steam as well) when, as a distraction, Goyer gave the filmmaker a daydream version of how he would tackle a story about the last son of Krypton.

"He basically told me, 'I have this thought about how you would approach Superman,'" Nolan recalled. "I immediately got it, loved it and thought: That is a way of approaching the story I've never seen before that makes it incredibly exciting. I wanted to get Emma and I involved in shepherding the project right away and getting it to the studio and getting it going in an exciting way."

Aaagh, so vague! We'll be watching this closely, though. What do you think? You have faith in Nolan?