Fans everywhere were thrilled to hear that NBC's Chuck is coming back sooner than we expected: this Sunday wth a two-hour premiere before moving to its regular Monday night timeslot.

And there are certainly some major changes coming. I recently spoke to Mark Christopher Lawrence, who plays recently demoted Buy More manager Big Mike. He gave us a bit of info on what's ahead for the Buy More and whether another 3-D episode is a possibility.

Lawrence said he hasn't seen the script for the back six episodes yet, (they've filmed the first 12 already), but he told us that a 3-D episode hasn't happened yet.

"I don't know," Lawrence said with a laugh. "I wasn't a big fan of the actual process of the 3-D episode. It's so tedious. It's such a tedious way to work. It really slowed production down, and I think normally it takes us eight days to shoot an episode, and this took us 10. My first reaction is to say, 'I hope not.'"

After all the rumors of the Buy More being out of the show, Lawrence relieves our fears. He tells us that, though it's changed, it's still there. I asked him whether Big Mike was going to reclaim his yellow shirt, and with it his authority in the store. 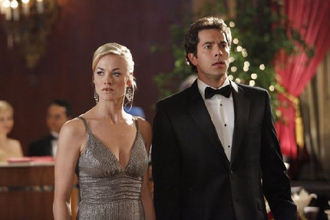 "Well, you've got to watch the first episode." Sounds like there is going to be a shift right away. I'm sure you've also heard speculation that someone will be working at a Subway, since the sandwich shop swooped in and helped save the show. "I don't know what they're going to do as far as having someone working there, but definitely you're going to see some Subway stuff in the show." He also said that, though spokesman Jared hasn't appeared in any of the episodes he's filmed, Big Mike does mention him.

Of course, I had to ask Lawrence about Big Mike's marlin and whether it will return in season three. "Yeah! The marlin ... Remember the last episode, the marlin was in the TV room when Big Mike sort of was demoted? He gets sort of moved into the TV room, and that whole sort of mafioso, Marlon Brando thing that got lost somehow. The marlin was set up in the TV room. So it's still there."

About Big Mike's love life, Lawrence had this to say: "When we left off last season it was still going with Morgan's mom. So far we're just kind of hanging on to that story. ... She's funny. ... Patricia Rae is hilarious." And while Bolonia Grimes is back, Lawrence tells us that Mike's ex-wife won't be.

Lawrence told us he couldn't reveal much about the two-hour season premiere, but he did say this: "Well, things have been flipped on their ear. And life in the spy world and in the Buy More is not as it was left in the last season. So it would be nice to get everybody's opinion after the fact." (You can follow Lawrence on Twitter at @MarkChrLawrence.)

Chuck returns to NBC with a two-hour premiere on Sunday at 9 p.m. ET/PT
before returning to its regular timeslot on Mondays at 8.

For the latest sci-fi news, follow us on Twitter at @scifiwire
Tag: Chuck
Close Search Return to SYFY homepage.