What's Andy Barclay up to in SYFY & USA's Chucky series?

Chucky is back, and the most murderous Good Guy Doll around has found somebody new to play with. In Chucky, the new USA Network and SYFY series, the serial-killer possessed doll has found a new “owner,” a teen named Jake Webber (Zackary Arthur). However, Jake is not the first person to have encountered Chucky, and the series premiere alludes to Chucky’s first "owner," Andy Barclay. Andy first appeared in the first 1988 Child’s Play and went on to face off with Chucky in several sequels. What’s Andy up to now? Let’s review.

Andy (played by Alex Vincent in most of the films and in the series) made his debut as a 6-year-old in Child’s Play, when he’s gifted a Good Guy doll for his birthday. Unfortunately, as is so often the case, that Good Guy doll has been possessed by the spirit of a serial killer, the notorious Charles Lee Ray. After gruesomely murdering several people in Andy’s life, Chucky attempts to transfer his soul into Andy so that he can be a real boy. However, Andy, his mother Karen (Catherine Hicks), and detective Mike Norris (Chris Sarandon) are able to defeat the doll.

Chucky comes back, though, as does Andy, in 1990’s Child’s Play 2. Now an 8-year-old, Andy is living with foster parents because his mom is undergoing psychiatric evaluation since nobody believes her crazy story about a killer doll. (This will be a reoccurring theme throughout Andy’s life.) Chucky makes Andy’s life a living hell before attempting once more to transfer his soul into the boy, though he’s unsuccessful. This time, Andy plays a more direct role in defeating the evil doll, pouring molten plastic on him and helping to jam an air hose in his mouth. This is still not the last time that Andy battles Chucky, but he’s already becoming something of a doll-killing pro.

In 1991’s Child’s Play 3, Andy (played now by Justin Whalin) is 16 and living at a military academy, where he’s been told in no uncertain terms to knock it off with this killer doll bogus. When Chucky returns, he’s set his sights not on Andy but on a new victim, 8-year-old Ronald Tyler (Jeremy Sylvers). Andy struggles to convince Tyler that Chucky is evil, but eventually, he is able to defeat Chucky once again, this time by pushing him into a giant fan. Andy ends the movie by surrendering himself to police custody for questioning.

Andy does not directly appear in Bride of Chucky or Seed of Chucky, though he’s briefly referenced in both. He makes his return (once more played by Vincent) in 2013’s Curse of Chucky. He’s seemingly not in trouble with the police anymore, but he’s more than ready for Chucky’s bulls***. After spending most of the movie trying (and failing) to battle Nica Pierce (Fiona Dourif), Chucky sends himself to Andy’s house in an attempt to kill his now-adult nemesis. Andy’s ready for him, though, and blasts him point-blank with a shotgun as soon as Chucky emerges from the box. Nice.

We last saw Andy in Cult of Chucky, where we learn that, after he shot Chucky at the end of the last movie, he kept Chucky’s deformed head and has been torturing it. The problem is, that’s not the only Chucky, as Charles Lee Ray has figured out how to inhabit multiple dolls at once. At Harrogate Psychiatric Hospital, where the previous movie’s heroine Nica is a patient, Good Guy dolls are being used as a therapeutic tool. Naturally, Chucky uses this to start causing chaos, and Andy decides that he needs to get himself admitted to Harrogate in order to stop the bloodshed. Now inside in the hospital, Andy is able to defeat some Chuckys but he’s locked in his cell after Chucky possesses Nica. Our hero is behind bars for good.

...Or is he? Cult of Chucky’s post-credits scene sees Andy’s old foster sister Kyle (Christine Elise McCarthy) enter his house to continue torturing the Chucky head, with the implication being that Andy has escaped Harrogate.

Where is Andy during the events of the Chucky series? Andy is presumably still on his anti-Chucky crusade, and he calls Jake to warn him about Good Guy dolls. We know that Vincent will appear in the series, so it probably bodes well for Jake that he’ll have a seasoned doll-killer in his corner. Now, if only Andy were able to kill Chucky and make it stick…

New episodes of Chucky are set to premiere on SYFY & USA every Tuesday evening at 10/9c. 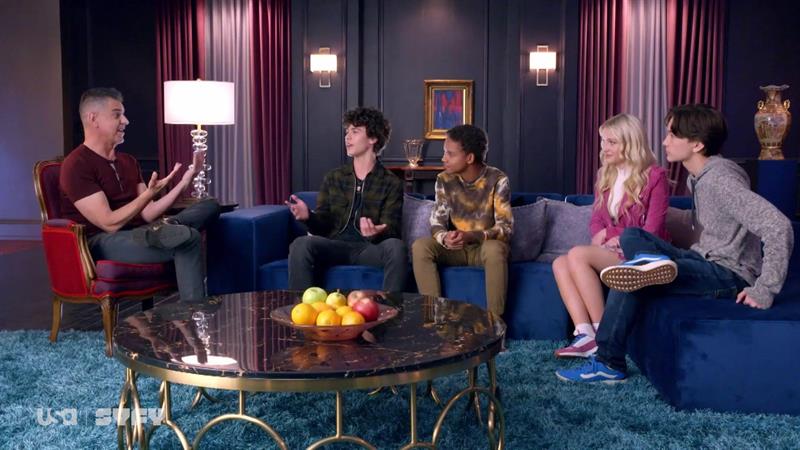