Somewhere between watching the first half-hour of the new Star Trek film and, five days later, the season finale of Lost, something happened.

You know how it is when you have that second piece of dessert? It tastes great at the time. The sensory delights linger through the after-dinner drinks and through the evening ... right up to the moment when you step on the scale the next morning.

It can happen with stories, too. There are themes and high concepts you love, then you have one more than the standard adult requirement.

For example, I reached this point with the alien-invasion theme on television four seasons back, when NBC's Surface, ABC's Invasion and CBS's Threshold were all airing at the same time.

It's happening this summer with a pair of Big Rock Hits Earth miniseries. ABC already aired Impact, and NBC is promising Meteor: Path to Destruction. This comes a decade after the dueling Big Rock features Armageddon and Deep Impact, which were two decades after dueling Big Rock novels, Lucifer's Hammer and Shiva Descending.

I was happily watching Star Trek, prepared to love every minute of it—which I did, right up until the time when the Romulan ship appeared from the future.

Let me say this again, possibly saving myself half a dozen comments: I liked this movie. It was a wonderful re-invention of the Star Trek franchise. Long may it wave. Can't wait for the sequel.

Five days later I was watching "The Incident" on Lost. Jack and Kate and Hurley were trying to work some time-travel-related magic on the Lost island of 30-odd years ago when I realized that two characters—Daniel and Miles—were in the story in different phases of their lives.

Which is painful, because I love them. Mark Twain's A Connecticut Yankee in King Arthur's Court. Robert F. Young's charming "When Time Was New." Heinlein's "By His Bootstraps." Lewis Padgett's "Mimsy Were the Borogoves."

Just last month I read Joe Haldeman's The Accidental Time Machine. Not long before that, I revisited Harry Harrison's The Technicolor® Time Machine—which if nothing else possesses one of the best titles in sci-fi history.

I grew up watching Peabody and Sherman and the Wayback Machine. I liked Time Tunnel. I enjoyed all of the Back to the Future movies.

I love the forms a time-travel story can take. You can leap forward and experience the near future, as in Gregory Benford's Timescape or Algis Budry's "Silent Eyes of Time," or, of course, in H.G. Wells' Time Machine.

I love it when characters go back in time, as in Connie Willis' Doomsday Book or, even further back, as in Robert Silverberg's Hawksbill Station or Ray Bradbury's "A Sound of Thunder." 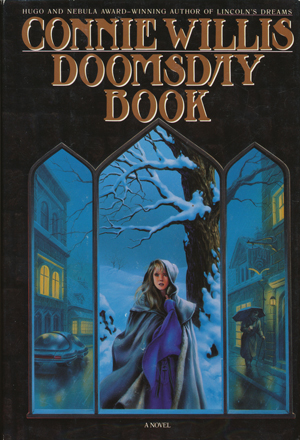 I like it when the author cleverly deals with paradoxes.

I love stories of scrambled time. Heinlein's "'—All You Zombies—'" and David Gerrold's The Man Who Folded Himself, and Kurt Vonnegut's Slaughterhouse-Five.

I love stories where time is squished like a Slinky—if you've never read David Masson's "Traveler's Rest," please do.

Give me another column and I can give you a list equally long and distinguished.

I have written time-travel stories and spent hours helping other writers develop them. I even worked on an entire series about a time-traveling secret agent, called Seven Days. My best unfilmed and never-to-be-filmed script was titled Mount Thunder and dealt with time travel. In it I invent or at least cleverly elucidate the principles of chronological elasticity, though we don't have space to go into that here.
I agree with anyone who claims that the time-travel story has been Star Trek's most successful trope. The original series' "City on the Edge of Forever" is generally cited as one of the best, if not the best. Star Trek IV: The Voyage Home—best of the movies.

Any number of TNG and Voyager episodes used time travel.

Why should I be tired of it?

It's not just over-exposure, though that is a major element. I doubt that a movie or television viewer of 15, or even 30, would be so jaded. I feel a bit like the cranky old neighbor telling the kids next door to "get that time-travel stuff out of my yard!"

My real problem, however, is actually the way time travel is used in Lost and Star Trek.

It's just too danged easy.

For Star Trek especially, flinging yourself into the past seems to be about as difficult as catching a subway from Oakland to Starfleet HQ in downtown San Francisco. Every starship seems to have an extra "time leap" button on the control panel, to the right of "impulse power" and "warp factor," much as the hot cars in the original Fast and Furious had a special button for nitrous oxide.

I know the value of skipping the pseudo-science lecture, where the writer shows her variation on the theory and practice of time travel (title of an excellent essay by Larry Niven, by the way). But it would be more dramatic and, to this viewer, more creatively satisfying if we had some idea of the immense difficulty involved in going backward from 2175 to 1984.

Isn't that one of the core truths of drama? That the larger and more terrifying the challenge, the more satisfying the resolution?

In Lost this past season, the characters were flipped around the chronosphere like leaves in the wind. As the time changes increase, their dramatic impact diminishes.

When characters reach their past, they often take actions that restore the future—keep their world as it is or was or should have been.

In the Lost finale, Jack grew determined to set off a bomb that would destroy the Island and radically change time from 1979 on. Do we call that chrono-genocide, eliminating every living thing in the universe?

One possible solution is to take the position that the instant our hero arrived in the past, a new timeline was created. All those people who supposed to be born—no problem. They live on in Timeline B as we continue with Timeline A.

That's a relief. It's also, well, easy. If there's no conflict, what's the choice? Go ahead. ... Set off that time bomb. Make yourself happy, because it doesn't really matter?

Time-travel stories have become the empty calories of sci-fi storytelling.

So, much in the vein of an overstuffed customer stumbling away from a Krispy Kreme in sugar shock, I'm calling for a "time out" on time-travel stories. Not a permanent ban. Just a season off.

And while I hold my breath, I'll start urging a hiatus for vampire stories. ...

Michael Cassutt has developed time-travel stories for The Twilight Zone, Outer Limits and Seven Days, among other television projects. He is also the author of 11 books and 30 short stories.