The producers of CBS' The Big Bang Theory revealed that comic-book legend Stan Lee will appear as a guest on an upcoming episode, the latest in a string of sci-fi cameos that has included Star Trek's Wil Wheaton, Battlestar Galactica's Katee Sackhoff and Dollhouse's Summer Glau. (Spoilers ahead!)

"We're doing an episode with Stan in about two weeks, so it'll be on in February," co-creator and executive producer Chuck Lorre said in a group interview Saturday in Pasadena, Calif., as part of the Television Critics Association winter press tour. "He's going to be [playing himself,] Stan Lee. He's going to be doing his autograph session at a comic-book store, and he's going to have a run-in with Sheldon."

Of all the celebrities for Sheldon (Jim Parsons) to meet, it would seem like he'd be complimentary to the creator of Spider-Man. But as it turns out, Lee will inconvenience Sheldon in that episode's story.

"It's not an issue so much about the comics themselves," Lorre explained. "He's in a hurry to get to court, and he wants Stan to hurry up because he's got to appear in court."

The Lee cameo came about because the show was asking him for a small favor. They had a business connection with Lee, and it snowballed into the on-screen appearance, executive producer and co-creator Bill Prady explained in a separate interview.

"We actually wanted Stan Lee to autograph a prop that was used in an episode, I think the next episode that airs," Prady said. "There's an autographed Stan Lee prop, and because we were showing it on camera, they asked us to see if we could actually get Stan Lee's autograph. Otherwise we couldn't show the signature. Chuck knows Stan because he used to work at Marvel Animation years and years ago. Stan said he'd be available for a cameo, so we had a story that needed Sheldon to be rude to a celebrity. We said, 'How about Stan Lee?'" 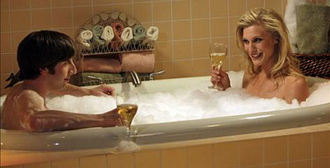 The episode with Lee's prop also features a celebrity guest star, Danica McKellar. Fans might remember her as Winnie Cooper on The Wonder Years, and Prady reminds us that she's a real-life math genius. She is not playing herself in her episode.

"She's playing a character," Prady said. "She is playing a woman that Koothrappali [Kunal Nayyar] picks up at a party after he's been drinking."