Tag: TV
TV THIS WEEK: Agents of S.H.I.E.L.D. returns; Space Force blasts off; Legends and more
Tag: Science
How did this galaxy emerge from the chaos just 1.5 billion years after the big Bang?
Tag: Science
This is what happens when you use a selfie stick to make a scientific discovery
Tag: Science
Scientists are all abuzz over this rare prehistoric bug fossil found in Utah

Marvel Comics writer Matt Fraction is a major player in the comic-book industry. Winner of this year's Eisner award for best new series for The Invincible Iron Man and writer of Uncanny X-Men and multiple Thor stories, he's now taken on video games.

Though it draws on the film for inspiration, his story for the upcoming Iron Man 2 game is completely original. I got a chance to catch up with Fraction at the Marvel booth at Comic-Con, where he told me about writing for games, why comics have suddenly exploded into popular culture and what he's got coming up next.

Mickey Rourke trashes Marvel execs for messing with Iron Man 2
Tony Stark looked into our scientific future in Iron Man 2. How close are we to assembling it?

He talked a little bit about the Iron Man 2 storyline. "It picks up the thread of where the [first] film left off, with Tony declaring that he is Iron Man, and it might be awesome for Tony, but it's not so awesome for the other people in the world," Fraction said. "Some of the ghosts of his past come to haunt his future."

The game has an original story, but the trick was meshing it with the movie. "They're both facets of the same gem," Fraction said, adding: "But they're definitely different beasts. It's just sort of my job to make sure the texture and the fabric was there. That they all sort of felt related, ... felt connected and felt real to one another."

Fraction said that writing for the game was "a little bit like writing by algebra. ... There were already large plot pieces from the film that had to be in the game. We had plus, and we had x, and we knew it was going to equal six. So we had to go back and figure it out." 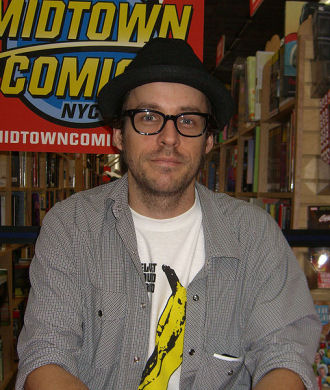 Fraction has spent a lot of time in the world of Tony Stark, and he said he wouldn't have it any other way. "I like Tony a lot," he said. "I find him very fascinating. I could write the guy forever, I think. He's a billionaire, he's got the most amazing wardrobe in the universe. He's the smartest guy in the room. He's an alcoholic, he's a workaholic. He's got some real darkness and extraordinary drive and everything else. It's a really fascinating combination. He's our vision of who we can be. He's evolution by the bootstraps."

Fraction said he hasn't played the game yet and added that writing the story didn't mean he was at all involved with the mechanics of the game.

Fraction has been in the comics game forever and has a large and loyal following. I wanted to get his take on why comics have exploded as a genre recently. "Well, I think it's because people have realized that you can make billions of dollars with this stuff," he said. "It costs a couple grand to publish a comic book, and it could turn into a billion-dollar movie or game property. And comics have an infinite budget. Film and games can't match comics for what they're capable of. Still. The comics are a hundred-year-old technology. A hundred-year-old storytelling technology. And I don't care what James Cameron is doing with Avatar, and I can't wait to see it, but I guarantee it wouldn't hold a candle to what Jack Kirby was doing 40 years ago. Computers are getting to stuff Kirby was doing 40 years ago. You know what I mean? They're almost to where we were 50 years ago. Congrats."

He's got a ton of projects going on, so I asked what he had coming up. "I write a book for Image called Casanova that should be starting up again probably ... the end of this year," he said. "Casanova is a psychedelic science fiction super-spy comic. Sci-fi super spy. It's sort of a hallucinogenic, cosmic James Bond with a little bit of Doctor Who and a little bit of Lolita thrown in for good measure. Lots of sex and violence and crazy things you can only do in comics."

The Iron Man 2 game is due in 2010 to coincide with the May 7 release of the sequel movie.