Of all the cool tech to pop up in the Star Wars series, the speeder bikes from the epic Episode VI: Return of the Jedi chase scene are some of the coolest. They're fast, dangerous and pure hovercraft fiction. (Well, maybe not that last one for much longer.)

A California-based company called Aerofex seems to think it's figured out how to actually make a two-duct rotor hovercraft work. The design originated in the 1960s, but it was never perfected to provide actual usability for a rider.

Enter Aerofex, who added knee-level control bars to the system, and their prototype has actually worked pretty well in the first round of tests. 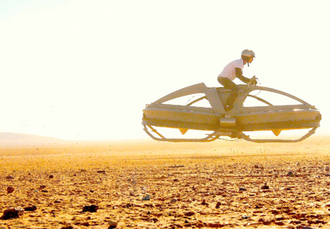 The only problem? The company still has a lot of testing to do, and at the moment they've capped human flights at 15 feet high and 30 mph—though the bike can apparently move about as fast as a helicopter in the right environment.

Early stages or not, Aerofex founder Mark De Roche believes the hover vehicle has the potential to be the "next big thing" in personal transportation. He said via Yahoo:

"Think of it as lowering the threshold of flight, down to the domain of ATV's (all-terrain vehicles) ... It essentially captures the translations between the two in three axis (pitch, roll and yaw), and activates the aerodynamic controls required to counter the movement -- which lines the vehicle back up with the pilot. Since [the pilot's] balancing movements are instinctive and constant, it plays out quite effortlessly to him."

So when can you get one of these bad boys and live out your Return of the Jedi fantasies? The company has drone testing scheduled through the end of 2013, so it'll be at least 2014-2015 before these could actually be available to the general public.

But it definitely looks worth the wait:

What do you think? How much would you pay for your own hovercraft?