Concept art for the film that's the next 2001/Blade Runner

You know that awesome sci-fi short film The Gift we posted yesterday? We've got more information about the proposed feature film based on it, and it's apparently a lot farther along than we thought.

According to Slashfilm, director Carl Erik Rinsch has already completed a full story for a feature film called Small, from which he drew the short movie as a starting point:

I have also learned that Rinsch has met with various nobel prize winning scientists and theorists in designing a world and a narrative that could be scientifically plausible. He's pretty hardcore about creating a world that could actually exist, ala 2001. I've heard that in the past, Rinsch has joked that the project is a mix between 2001, Blade Runner and Doctor Zhivago with a bit of Bourne-style action. Sounds pretty awesome and absurd at the same time (but I think that is the intent).

Remember that time 'Hannibal' ate Ray Liotta's brain? How Ridley Scott and team made it so grossly memorable
Raised by Wolves creator says it's a 'close cousin' to the Aliens universe, but doesn't quite 'link up'

The Blade Runner link is no coincidence: Rinsch is a commercial director who works for Blade Runner director Ridley Scott, and Scott is the guy behind the Philips short film experiment that produced The Gift. Rinsch was also the guy that Scott originally tapped to direct his proposed Alien prequel before Fox said Scott himself had to direct. Also, the Philips short movie mentions a unicorn.

So how far along is Rinsch's movie Small? Check out the production art for the movie, above and below (click to enlarge):

Apparently the filmmaker has a nice partnership with J.J. Palomo's special fx company in Barcelona, Spain, which he regularly employs for his commercial work. He has used his own money to independently fund development of this feature project. And these photos are pretty awesome - some kind of spacecraft pod and snow-suit mech. 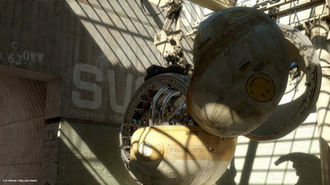 For the latest sci-fi news, follow us on Twitter at @scifiwire
Tag: Ridley Scott
Close Search Return to SYFY homepage.