"We're actually going to shoot that film next September/October with Tim Burton and Johnny," King said in a group interview Friday in Los Angeles, where he was promoting The Young Victoria.

Burton is still finishing post-production on Alice in Wonderland, which also stars Depp and opens March 5, 2010. King is already prepping production on Dark Shadows with screenwriters so that it is ready for Burton to shoot next fall. 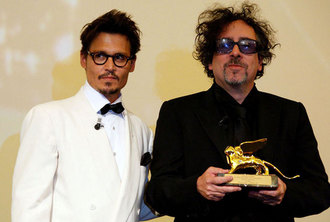 "We've been working on the script a lot, even though he's working on Alice," King continued. "We've been given a script. John August wrote the first screenplay. We're making some changes, but the film's going to be in production, as I say, September or October of next year."

Dark Shadows was a daytime soap opera on ABC from 1966 to 1971 featuring Jonathan Frid as Collins. NBC tried a weekly prime-time series reboot in 1991. The original was famous for its gothic tone and setting.

King said the Dark Shadows film would have something to say in the post-Twilight world of emo vampires, but wouldn't spoil the new take. "This is going to be Tim Burton and Johnny doing a vampire movie, right?" King teased. Enough said.