SCI FI Wire confirmed today that a contract has been signed with CBS/Paramount to reopen the Star Trek The Experience exhibit in Las Vegas on May 8 —starting with at least a new restaurant and retail shop—to coincide with the opening of J.J. Abram's Star Trek movie.

"It is a bit premature to talk about it, but I can confirm that a contract has been signed," Liz Kalodner, executive vice president and general manager of CBS consumer products in New York, told SCI FI Wire exclusively. "I do not have any further comment."

Las Vegas city public information officer Jace Radke confirmed to SCI FI Wire that Star Trek The Experience, which was to be closed at its home at the Las Vegas Hilton this year, will move downtown to the Neonopolis Center. "This is going to be a major part of the downtown redevelopment we have been working on, and the city department of business development has been trying to encourage attractions like this to the area," he said.

The Experience featured a restaurant and bar, shops and motion-simulator rides themed to Star Trek: The Next Generation ("Klingon Encounter") and Star Trek: Voyager ("Borg Invasion 4-D"). It's expected the new exhibit would feature similar rides at some point. For now, however, the plans envision just a new version of Quark's Restaurant and Bar, a Museum of the Future (perhaps incorporating elements and characters from the new movie) and a shop.

For his part, Las Vegas mayor Oscar Goodman said, "We are very excited about this for downtown."

The move would be part of the city's effort to redevelop the older part of downtown Las Vegas—situated at the end of the Strip of large casinos—into a more vibrant tourist and residential area. The Neonopolis project is one of the centerpieces of the area.

Radke added, "We are trying to secure other projects as well, but this Star Trek exhibit is happening, and we hope to have a portion of it ready by May 8. We're working on getting the Ts crossed and the Is dotted in the contract." 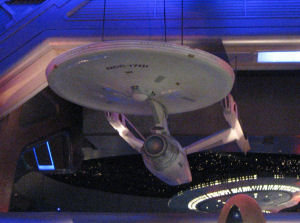 Journalist Mark Hansel, who writes for In Business Las Vegas, has seen the contracts signed by studio officials, Neonopolis owners and the city of Las Vegas. "I have seen the contract, and I know that the city redevelopment manager met with CBS officials in New York to seal the deal," said Hansel, who has covered the downtown redevelopment for years for In Business and the Las Vegas Sun. "They are hoping that there will be some sort of premiere event at the time of the movie opening that will be out here. Obviously, the big premiere will be in Hollywood, but they hope to have something out here, too."

The costumes, the historic timeline, models of the ships and other items at the Star Trek The Experience exhibit will be moved to a museum that is planned for the new location, but much of the exhibit probably won't be opened until the end of 2010.

"I wouldn't expect the cool stuff for about a year," Hansel said. "A lot of it also depends on the popularity of the movie and how well it does, but the trailer looks like it's going to be pretty great." He added: "The price is going to be cheaper, maybe $20 or $25, and there may be package deals or year-long memberships, that kind of thing."

Hansel said interest in the exhibit has waned in recent years. "I talked to people in the town about it, and they just weren't going or interested, but now there's a new buzz, especially since this is going back to the early years of the series," he added.

The new venue already has a 3-D-enabled movie theater, and there may be plans to have a 4-D "experiential" ride similar to the ones at the Hilton. Neonopolis manager Rohit Joshi projected that 7 million visitors could come to the exhibit a year, which Hansel said is "a reasonable estimate."

Neonopolis will also host the Southern Nevada Fine Arts Museum, a Barbizon School, the Spanish-language Telemundo station and an upscale nightclub. The biggest draw is expected to be Star Trek The Experience.