Cool new 3-D Dark Crystal sequel gears up down under

A 3-D sequel to 1982's cult-favorite fantasy film The Dark Crystal—called Power of the Dark Crystal—is in the works, to be directed by Australian brothers Peter Spierig and Michael Spierig (writers and directors of Undead and Daybreakers), the Jim Henson Co. announced today.

The screenplay was written by Australian Craig Pearce (Moulin Rouge, Romeo + Juliet"), based on an original script by Annette Duffy and David Odell.

The sequel is set hundreds of years after the events of the first movie, when the world has once again fallen into darkness, and follows the adventures of a mysterious girl made of fire who, together with a Gelfling outcast, steals a shard of the legendary Crystal in an attempt to reignite the dying sun that exists at the center of the planet.

Like the original, the new movie will mix live action and puppets, as well as visual effects.

Following is the official announcement.

We had a love-hate relationship with the original, but we have to admit a weird fascination with those fuzzy Muppet-like characters. And given that we're big fans of anything Henson, we'll have to check it out!

(Thanks to Slashfilm for the heads-up.) 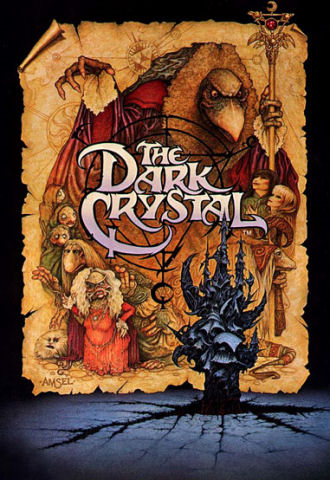 POWER OF THE DARK CRYSTAL

Sequel to Henson classic film "The Dark Crystal" to be financed and produced by Omnilab Media in Australia and executive produced by The Jim Henson Company.

3D, live action, visual effects film to be one of the largest Australian productions ever.

HOLLYWOOD, CA May 04, 2010 - In a joint announcement by Omnilab Media's Christopher Mapp and The Jim Henson Company's Lisa Henson, Australian based Omnilab Media is teaming up with The Jim Henson Company to bring the much anticipated fantasy sequel, "Power of the Dark Crystal" to the big screen in stereoscopic 3D. The highly anticipated film will be among the most ambitious projects to ever be produced in Australia.

Peter Spierig and Michael Spierig, writers and directors of "Undead" and most recently, "Daybreakers," have come aboard to direct the screenplay written by Australian Craig Pearce ("Moulin Rouge," "Strictly Ballroom," "Romeo + Juliet") based on an original script by Annette Duffy and David Odell. The legendary fantasy artist Brian Froud will reprise his role as conceptual designer of the film, which will use a stunning mix of live action and traditional puppetry combined with visual and special effects produced entirely in Australia. Omnilab-affiliated Iloura ("Where the Wild Things Are," "The Pacific," "Don't Be Afraid of the Dark") has already begun work on the film's complex CGI elements. With this team in place, next steps will be to secure worldwide distribution.

"'Power of the Dark Crystal' is an exciting and ambitious undertaking and, having worked on previous projects with the top-notch talent and crews that Australia offers, we know we have assembled the right team to deliver the sequel to one of the most enduringly popular titles in the Henson library. Peter Spierig and Michael Spierig are sure to create a film that will continue the legacy of the original and exceed the expectations of our loyal fans," said Lisa Henson, CEO of The Jim Henson Company. "We are especially enthusiastic to be working with Omnilab Media, a strong and growing force in worldwide film finance and production."

"We are very pleased to be producing this wonderful and fantastical film in Australia. The 'Power of the Dark Crystal' will showcase the depth of talent Australia has to offer up on the international stage, including the extremely gifted directing team of

Peter Spierig and Michael Spierig. The Jim Henson Company has consistently delivered an amazing range of entertainment over generations and is an iconic creative studio that we are proud to have partner with us," added Christopher Mapp from Omnilab Media.

Michael Spierig said, "We feel a tremendous amount of responsibility in telling this story with the same meticulous care that Jim Henson and Frank Oz gave the 1982 original." Added Peter Spierig, "This is a chance to take the world of puppetry into the modern age by using modern techniques (like motion capture CGI) and the tried and true methods (like puppetry and animatronics) to create a one hundred percent real world that is unique to 'The Dark Crystal'."

Set hundreds of years after the events of the first movie when the world has once again fallen into darkness, "Power of the Dark Crystal" follows the adventures of a mysterious girl made of fire who, together with a Gelfling outcast, steals a shard of the legendary Crystal in an attempt to reignite the dying sun that exists at the center of the planet.

ABOUT OMNILAB MEDIA www.omnilab.com.au Omnilab Media is an Australian and New Zealand based globally focused vertically integrated entertainment company involved in the production, visual effects, post production and financing of a diverse range of film and television properties. Amongst the funding deals recently concluded by Omnilab Media, covering both production and P&A financing, are Oliver Stone's 'W,' 'The Bank Job.' 'The Messenger,' ''Bran Nue Dae,' and the upcoming 'Dylan Dog: Dead of Night,' 'The Loved Ones,' 'Tomorrow When the War Began,' and 'The Killer Elite.'

Omnilab Media has also created a new digital film company with Kennedy Miller Mitchell (Dr.D Studios) to use groundbreaking digital storytelling, animation and visual effects. The first production will be HAPPY FEET 2, with a range of other blue-chip properties in development.

The Jim Henson Company has remained an established leader in family entertainment for over 50 years and is recognized worldwide as an innovator in puppetry, animatronics and digital animation. Best known as creators of the world famous Muppets, Henson has received over 50 Emmy Awards and nine Grammy Awards. Recent credits include the Emmy® nominated "Sid the Science Kid," "Dinosaur Train" "Wilson & Ditch: Digging America" and "Pajanimals." Features include "The Dark Crystal," "Labyrinth," "MirrorMask," and "Unstable Fables" and television productions include "Fraggle Rock" and the sci-fi cult series "Farscape."

With additional locations in New York and London, The Jim Henson Company is headquartered in Los Angeles on the historic Charlie Chaplin lot, complete with soundstage and postproduction facilities. Independently owned and operated by the five adult children of founder Jim Henson, the Company is also home to Jim Henson's Creature Shop™, a pre-eminent character-building and visual effects group with international film, television and advertising clients, as well as Henson Recording Studios, one of the music industry's top recording facilities known for its world-class blend of state-of-the-art and vintage equipment.