Could Marvel's Avengers vs. X-Men end with [REDACTED]'s return?

If you've been following Marvel's 12-part superhero event Avengers vs. X-Men, you know there's the potential for an ending that could reshape the Marvel Universe in a big way. A just-released teaser image for the series' final issues definitely reinforces that, and reveals that AvX could mark a major reappearance. POSSIBLE SPOILERS AHEAD.

Marvel's been able to keep most of the plot details for the series under wraps so far, which makes this teaser all the more intriguing. We're sort of forced to wonder if the most obvious conclusion we could draw from it isn't the right one. 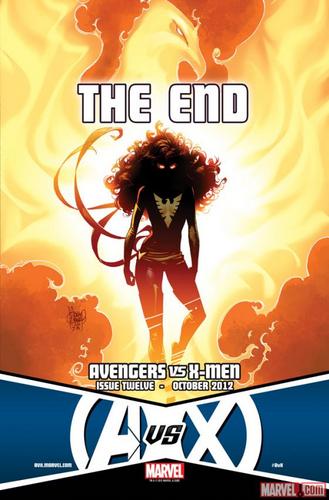 Of course, the obvious conclusion is that it's Jean Grey, the original member of the X-Men who first grappled with the unrelenting cosmic energy known as the Phoenix Force way back in 1976. She eventually lost that battle and seemed to die, but then returned, only to continue to struggle with the force through a number of other sort-of deaths. Jean finally seemed to lose the battle with Phoenix back in 2005, and hasn't been around since. Though fans have long speculated that she'll return sometime soon, Marvel's editorial staff has kept largely mum on the subject of Jean's possible resurrection.

But if it's not Jean, who (or what) else could it be? Well, readers of AvX will note that two other women (one of them with Jean's striking red hair) are at the center of events: Hope Summers and Scarlet Witch. Hope in particular has a connection to the Phoenix Force, as she's seen as a kind of messiah for mutantkind who will absorb the force and use it for good. Could the series end with her emergence as Phoenix? Is Cyclops suffering a hallucination in which Jean is calling out to him? Or is she really back? Would Marvel put it all out there for us so late in the game?