Courteney Cox, who is set to star in a fourth Scream movie, elaborated on a few details that were revealed by writer Kevin Williamson a couple of days ago about the sequel, which picks up the story 10 years after the events in 2000's Scream 3. Cox will reprise the role of TV reporter Gale Weathers.

"She has a kid now," Cox said in a group interview Saturday at the Television Critics Association summer press tour in Pasadena, Calif., where she was promoting her ABC show Cougar Town. "She's married to Dewey."

Scream 3 ended with Deputy Dewey (David Arquette, Cox's real-life husband) proposing to local newswoman-turned-true-crime guru Gale. The characters bonded during their investigation of the first Scream murders, through the campus crimes of Scream 2 and the film-within-the-film of Scream 3.

Williamson previously described Scream 4 as the beginning of a new trilogy. Cox has no trepidations about beginning another three films. "No, because [I take things] one day at a time," she said. "But I heard the idea for Scream 4, and it's fantastic." 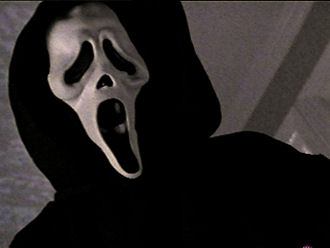 The Scream series tweaked the conventions of horror movies as film-obsessed killers terrorized teens a la their favorite slashers. Nearly a decade later, Cox said that she is ready for round four. "I'm excited," she said. "It'll be really fun."

With Cox and Williamson both beginning new shows this season, Williamson expects to turn in a final draft for Scream 4 during hiatus and make final deals with cast and directors after that.