At a DVD event celebrating the release of The New Blood, Buechler revealed that he's not merely revisiting past glories, but also about to reinvent one of them: Troll, a movie notable for the introduction of a character named Harry Potter Jr. (played by The Neverending Story's Noah Hathaway and no relation to J.K. Rowling's creation).

'Could You Survive the Movies?' Season 2 conjures real-life wands in first look at 'Harry Potter' episode

"I'm getting ready to remake a film that I did back in 1985," Buechler said in a news conference Wednesday in Hollywood. "It's a little movie called Troll that is likely to be fairly controversial when I do it; that's part of the reason why some of the hurdles that I've been jumping through to get the movie financially secure have been what they've been. But it is now quite financially secure, and I've got everything in place, so we're going to make some major announcements with regard to cast and other specifics."

Troll was Buechler's feature directorial debut, and like his experience on Friday the 13th Part VII, which he made two years later, the production suffered from too little money and too many time constraints. The difference now is that Buechler can actually complete his vision with a remake.

"I think the remake promises to be so much better than the original," he said. "I have so much passion for it that there was no other alternative but 'I gotta direct it.' I know that I can bring to it what I wanted to initially, [because] I was very much surprised the first time around with a radical budget cut a month before shooting. We had to sort of change our whole approach from a more serious, darker kind of a project into, well, 'We can't really show it, so we have to talk about it, so we have to play it more for laughs now.'" 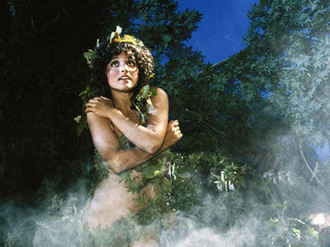 Buechler reassured fans that some of those familiar elements from the original would remain in the new version. "The first film, I think it's fine as it is in terms of it is a campy little kids' film, but now I don't have to make it that way," he explained. "But because of the existence of the first movie there has to be some of that aspect in there as well. So it's a hybrid of tone; it's still going to have some of the humor, but it's going to be more ironic as opposed to winking at the camera. I won't have to play it light. I mean, on the first one I got 10 percent of what those things were capable of, so now I've got more money, I've got more time, and what I can't do physically with animatronics and prosthetics, I'll do CGI."

While he didn't make any major casting announcements, Buechler indicated that several members of the original cast would return for the remake, if not necessarily in their original roles.

"We plan to reunite some of the original cast, but in cameos," he said. "I've talked to Annie [Lockhart], and I've talked to Noah [Hathaway], and there are folks that are very interested; one person will reprise their role, and that will be Phil Fondacaro. But the character of the troll is going to be played completely by someone else, a person of great stature, because we see Torok before he becomes a troll, and we see him after he transforms back into the person that he was. He also plays the personality and the voice of the troll."

As for that infamous musical number? Buechler said you'll even get a version of that, too. "It will have a variation on [the musical number]; not the same way, but the way it was envisioned," he explained. "I think the way I intend to use the music now, it's more of a march, and it's an army. The music was written before we shot the sequence, obviously, and there were different plans in making that film; one was the budget that I thought I had and then the budget that I knew I had, and taking all of the things I'd done in prep and try to [do them]. You ever hear the expression where you got a 10-pound bag and 20 pounds of material to stuff into it? I had like 50 pounds of material to stuff into it. So I did what I could with what I had."

Ultimately, Buechler didn't know where the film would shoot but was mostly grateful he wouldn't have to go too far to get some of the geographical authenticity he struggled to create on the original Troll. "It's been a quest to get where I'm at, but I'm moving ahead Nov. 1 on the picture, and we're going to start shooting in February," Buechler said. "It's going to be [in the States]. It may be in Baton Rouge; I'm not sure, because there's a lot of reasons to do it in town, because parts of it are in San Francisco, and I want to shoot San Francisco for San Francisco this time instead of with weird matte paintings."

Friday the 13th Part VII: The New Blood is now available on DVD.