Creators of Prince of Persia movie say it's fine in 2-D, more!

The upcoming Prince of Persia: The Sands of Time movie may be the one to break the cycle of bad game-to-screen adaptations, and producer Jerry Bruckheimer, director Mike Newell and star Jake Gyllenhaal gave us a behind-the-scenes peek at the movie in a news conference at WonderCon in San Francisco, talking about everything from the game to stunts, making the movie in glorious 2-D and looking ahead to the future of the franchise. Prince of Persia: The Sands of Time opens in theaters on May 28.

While it seems that every film is either being shot in 3-D or having the dreaded post-production treatment these days, Bruckheimer was confident his 2-D movie would do just fine.

"I don't know if it will win it, but it will certainly be a contender," he said over the weekend. "It's a terrific film, so we hope for the best. ... [3-D has] certainly done well at the box office, thanks to Avatar, but it's a new medium. It's wonderful. It's new technology that makes the theater-going experience even more exciting, so it's terrific, and hopefully you'll see a lot more movies in 3-D."

Newell talked about respecting the source material. "What we wanted to do was of course based on a storyline, and respecting the look and all of that, but we wanted to make it emotionally real," he said. "So we did a huge amount of work at the script stage, at the rehearsal stage, all of it, to make it absolutely real. So the fights, for instance ... you should have seen what I saw, which was Jake rehearsing fights like ballet, but because it's like ballet, it's also got to have an emotional reality to it as well, and that was always the big pressure—to take it into an area where a game couldn't go while not destroying the game side of it." 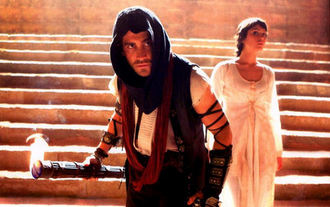 Game creator Jordan Mechner has been involved from the very start, and Gyllenhaal told us he spent time with the game for research, but that he was already a fan.

"I played [Jordan]'s video game first when I was a kid, so I played the first original when I was I don't know how old, and then I only started playing the game really intensely when I was doing research, particularly for stunt research," he said. "We would be in the middle of shooting, and I would go back to my trailer, and I'd be playing a game, and I'd see a move and call the stunt guys into the trailer and be like, 'Hey, you guys, check out this move—can we try it? And they would be like, all right, mate!"

Gyllenhaal also talked about the stunts he was allowed to do. "It always varied," he said. "It got a little bit dicey towards the end, because everybody saw that I liked doing things that were a little bit dangerous, and so we tried our hands at things that were pushing it a little bit. I think in the end there was this fight towards the middle of the movie that we shot at the end with my brother, where he has an ax, and I'm fighting him with my sword and a shield that I have left, and we really got dangerous with that fight.

"There were a few times when the ax came so close to my face almost that everyone was like, 'Aw, that was so good!' And I'm like [sobs], 'Oh, it looks so good!'" he said. "So, definitely, that ax fight was an intense one, and some of the jumps got pretty [intense]. ... I'd go, 'It's OK, guys. You don't have to give me so much. Let it go.' And I'd go, bam! And my knees would be secretly weeping inside. But besides that, there was a big, 35-foot jump I did that got a little hairy a couple of times, particularly when I was like, 'Let me try it again!'"

Bruckheimer told us that a franchise wasn't on his mind at all during shooting. We find that hard to believe, but we get what he's saying. "Absolutely zero of making it a franchise," he said. "What you try to do is make a really compelling movie with strong characters, great themes, great story, and if the audience embraces it, you get lucky, and then you think about making another one. When we made the first Pirates movie, we had no inclination that the audience would accept a film about pirates with Johnny Depp playing like he's drunk, so you just go with it, and if you get lucky and Disney wants to make another one and you people embrace it, we'll think about another one."