Cringe before the 1st gruesome image from Cabin Fever prequel

Wanna see what happens when a hungry little virus makes a meal of your birthday suit? Check out this spoilery set shot of a cast member stripped of more than her dignity in the just-wrapped Cabin Fever: Patient Zero.

Eli Roth's original Cabin Fever came out in 2003 and created a storm of protests, but it did sensational sales for its minuscule $1.5 million budget. In the bloody vein of later torture-porn-type survival horror fare like Hostel, Vacancy, Wolf Creek and Wrong Turn, Roth's film capitalized on a new wave of ultra-violent, gore-splattered horror flicks that held their tongues firmly planted against their cheeks while lapping up the cash.

Keep out! 15 creepy movie cabins you'd never want to visit
Chosen One of the Day: Dennis, the 'Pancakes' kid from Cabin Fever

A direct sequel, Cabin Fever 2: Spring Break, was released in 2009 to mostly awful reviews and faded fast from the box-office scene. Roth has no connections to the latest film.

This terrifying on-set tweet from doomed Patient Zero victim Jillian Murray was taken right before her onscreen demise at the hands of a menacing flesh-rending microscopic monster. The text in her message stated, "5 sec before I die. That's what 9hrs straight of make-up looks like!" 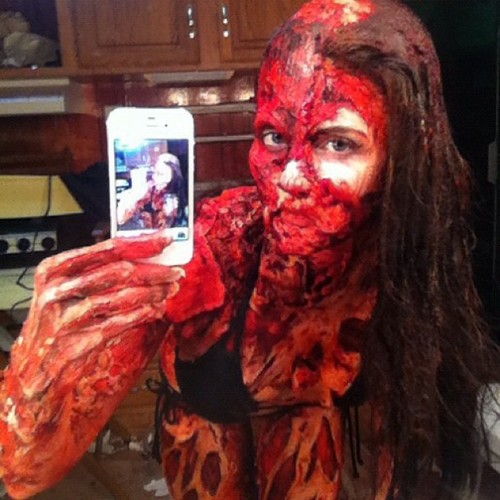 "When a cruise ship in the Caribbean collides with an abandoned research vessel, a deadly virus is unleashed. Passengers must find a way to survive before the flesh eating disease consumes them all."

Cabin Fever: Patient Zero is set for release sometime in 2013. Impressed with the fleshy peek?