Cupid's Bobby Cannavale has a secret on the ABC reboot series

Cupid is back! Ten years after ABC canceled Rob Thomas' 1998 series starring Jeremy Piven, the network gave Thomas another chance at it. The premise is the same: A man (Bobby Cannavale) claiming to be the god of love plays matchmaker to new couples every week, while psychologist Dr. Claire Allen (Sarah Paulson) evaluates his sanity. He's either the real deal—or really crazy.

Cannavale plays the possible Cupid in this series, going by the earthly name of Trevor. He told a press conference at the Television Critics Association winter press tour that it's fun walking the line between delusion and deity.

"I enjoy one more than the other," Cannavale said last week in Universal City, Calif. "I'm not going to tell you which one it is. I think that's the fun of the show. I think if we say he's one or the other, then it takes the mystery out of it. I very much like playing something very specific in my head, and the writing supports it either way."

The show premieres March 24 at 10 p.m. A group of reporters caught up with Cannavale after the press conference for more questioning. The following Q&A features edited excerpts from that interview.

Does the history of this show scare you a little, when you hear the idea that they want to remake something that didn't work the first time?

Cannavale: No, because I never watched it. They remake movies all the time, and I've been in revivals of plays. I never really thought, "This one played it" or "That one played it." It never occurred to me.

You talked about enjoying knowing the specifics of your character, but not telling viewers. Can you talk about the fun of keeping a secret for what could be a six-year run of a show?

Cannavale: It's the best. It's what you want as an actor. You want to always have a secret. You want to be able to have an active inner life. For me, this is the ultimate part to be able to do that. I don't ever have to reveal what I'm playing. It's exactly the kind of part I want to play.

How would you describe the comedy rhythm on the show?

How important a character is New York to this show?

Cannavale: I think it's huge. I wouldn't have done it if it wasn't in New York, first of all. I've worked my whole career in New York, and I think New York is the perfect character in the show. You've got 7 million people on top of each other. It's a petri dish for a guy like Trevor, who's got to match up 100 people. It's pretty easy to find. It's not like he's out in L.A., and he's got to run on the freeway, next to cars. 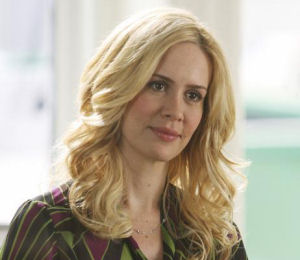 What will be the balance of each week's matchmaking story with the overall arc of Trevor and Dr. Allen?

Cannavale: I think that's a good conceit for a show. We know that we have to match up 100 couples before I'm allowed back. Trevor believes he is who he is. Everything he says, he believes 100 percent. So if we're going to believe what he's saying, he's got to match up 100 couples before he's allowed to go back to Mount Olympus. There's an urgency there. He's got a job to do. So, anthologically, that works as a show. Every week, we know we're going to see a new couple get matched up or not, and what's nice about it is the time that Rob [Thomas] is taking in developing this relationship, so you get a little bit of both. I get to be wild and crazy and frenetic in the service of this urgency that this character's having to get back home, and at the same time he's got to sit down for an hour every day and talk to this woman, who he's clearly attracted to. It's really fun to play.

So some episodes will end with couples not getting together, right?

Cannavale: Yeah. There are some red-herring shows, where you think it's going to be one couple, and then it ends up being another couple, so that's kind of fun.

Who are some of your favorite couples so far?

Cannavale: I liked the "My Fair Masseuse" one. I liked that story. I love Pygmalion, I love My Fair Lady, and it's the same story, just modernized. That's my favorite one so far. Basically, there's a masseuse, who's this woman from Queens who's got a really strong accent, and she wants to get in with her fiance's family. They're from Connecticut and sort of upper-crust. So I match her up with a linguist to teach her how to speak, and they end up matching up.