We got a preview of what fans may see at the D23 Expo in September, presented by D23: The Official Community for Disney Fans, during a sneak peek at Comic-Con last month, which you can see after the jump.

The Expo will preview upcoming Disney films and offer behind-the-scenes looks at Disney theme parks and artifacts, costumes and props from the company's movies.

Spacetime shakes: For the first time, astronomers see a black hole eating a neutron star
Black holes echoing through spacetime could be telling us they aren’t what we think they are

Disney archivists Becky Cline and Rob Klein showed us around some of the props at Comic-Con, which we were told are only a tiny sample of what will be seen at the expo. Click on the images to enlarge. 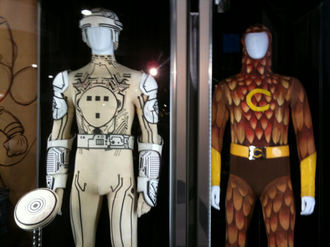 The TRON costume was worn by Bruce Boxleitner, who played Alan Bradley/Tron in the film, and it's the only one Disney still has. Klein, who restored the costume, told us, "While filming TRON, they didn't know whether they were going to have it be on a white stage with black suits. ... They realized they were literally welding with light, and they had to make the set so bright that they thought, 'Let's black the sets out and use white costumes.' So the black lines on the costumes represent what they call the 'circuit reveal,' and that was what the animators hand-cut into the cels to make the circuit glow. It's basically a leotard. You've got leather boots and these foam pieces on the arms, and then hockey gear for the shoulders and the helmet highlighted with gaffer's tape. Hey, not very high-tech, but it got the job done." He also said that he had to replace the tape while restoring the costume because it had begun to peel off. 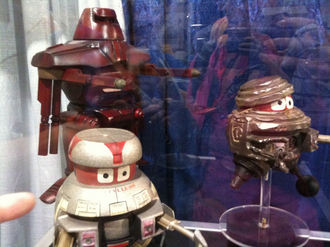 Here we have V.I.N.CENT., Old B.O.B. and Maximilian from 1979's The Black Hole. Klein told us that V.I.N.CENT. and Old B.O.B. were filming miniatures hung by wires. This Maximilian was not used in the movie, but instead was used to test a gag. He pointed out the sprinkler head at the ends of his arms. 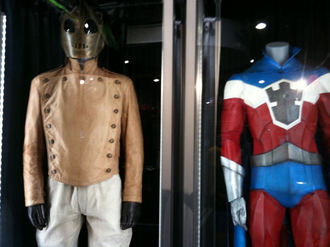 The full costumes for 1991's The Rocketeer (left), worn by Billy Campbell, and 2005's Sky High, worn by Kurt Russell. 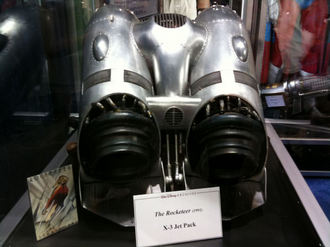 The X-3 Jet Pack from The Rocketeer. Cline pointed out the bullet holes that were plugged up in the film with "lucky gum." 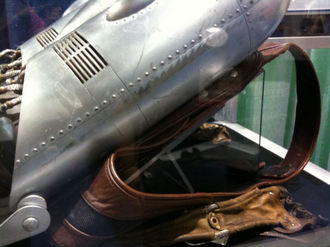 The side view shows the control gloves and harness. Cline told us that the gloves are very rare. There were many used in the film, but she believes these are the only ones left. 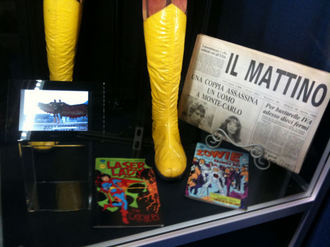 Klein also restored the Condorman costume and told us that these props from the film are drawing a lot of attention. "The character in the film is a comic-book artist, so I'm not surprised," he said.