Danny McBride, who plays Will in Land of the Lost, told reporters that he apologizes to fans of the original 1970s children's TV show on which the movie is based, but defended the new take as something that will work for audiences.

The new Land of the Lost updates the trippy Sid and Marty Krofft series with state-of-the art visual effects and characters who are now full-grown, unrelated adults: Marshall (Will Ferrell), Will and Holly (Anna Friel). Oh, and the movie is kind of smart-alecky.

"There are the purists, who I always read about, that are like, 'I can't believe you're raping my childhood,'" McBride said in a group interview last week in Hollywood. "If Land of the Lost is your childhood, and we're raping it, I apologize. I think the show is awesome, and I think [screenwriters] Chris Henchy and Dennis McNicholas keep the mythology intact without taking it too seriously. If it was taken too seriously, it's just Jurassic Park. We've seen that movie before. This is a more interesting take on that tone."

Did you know Land of the Lost before?

McBride: I did know it. I don't think it was in the first run, but when I was a kid, I had definitely seen this show and was definitely freaked out by it, but found myself watching it whenever I could.

What freaked you out?

McBride: Chaka's brow freaked me out a little bit, and the Sleestaks. It's funny, because I had forgotten about the Sleestaks, which is like, "How could you forget about them?" When I first came to the set and all those Sleestaks were there, seeing them brought back all these primitive fears in me that I had when I was a kid. I was like, "Oh, I hated these guys, and now I have to act with them."

You were freaked out by Chaka, and it's come full circle to where you 69 him. 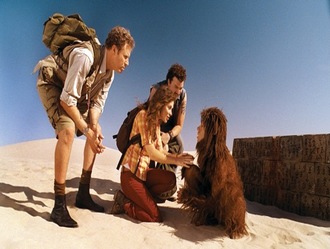 How did that scene evolve?

Were those giant crabs actually edible?

McBride: I didn't know we were going to be really eating it. They just handed us those crab legs, and it was stuffed with turkey. They were like, "Yeah, you can eat this," and we were like, "OK."

What would Kenny Powers, your character from HBO's Eastbound & Down, think of this film?

McBride: He'd probably watch it. I think he would like it. He's not a real person. He's a character.

Did you tease Anna Friel about being British?

McBride: I did. She was one of the first real British people I've ever met before. I thought they just existed in history books, but, no, they're real [laughs]. They walk amongst us. It wasn't like They Live. I didn't have to put sunglasses on to see her or anything. She was just there, all the time.

Was there anything you were surprised to learn about British people?

McBride: She introduced Will and I to all these weird things, like Ribena, this weird little red thing that she would put into her water. No, I had met British people before, just none as beautiful as Anna Friel. I'm laying it on thick.

How fun was it to do the wirework?

McBride: It wasn't that much fun, to tell you the truth. I suffered a casualty, doing that. I lost a mole on my stomach, from the wire. It was a good mole. He had been with me since I was a kid, and I lost him on this film. It was terrible. ...

Where do you think your character would go if Land of the Lost got a sequel?

McBride: I feel like they would come back to him, and he would be like [Colonel] Kurtz in Apocalypse Now. It would be crazy.