Danny Trejo promises Machete will piss you off

Danny Trejo has his first leading role at the ripe old age of 65. This year may have been a tough year for many Americans, but Trejo got both leading-man status and AARP benefits!

Trejo has nearly 180 credits, but most moviegoers probably know his unforgettable face much better than his name. Robert Rodriguez aims to change that with the fantasy-tinged Machete, based on the "fake" trailer that aired during Grindhouse, the 2007 double feature that Rodriguez split with Quentin Tarantino.

As it turns out, Machete had its origins long before that. "Everybody thinks that Machete came out of a trailer, but it didn't," Trejo told a group of press from the set of the hotly anticipated Predators, in which Trejo also stars. "Robert told me that he wanted to do this movie called Machete when we were doing Desperado. If you look at the character in Machete, it is a metamorphosis. He kind of molded this character of Machete."

"They're editing [Machete] right now, so I'm writing some score," Rodriguez adds from the Predators set. "But it's going really terrific. It looks really great."

"Machete kicks ass," says an enthusiastic Trejo. "It is a culmination of Desperado, Once Upon a Time in Mexico [and] there's even a little bit of From Dusk Till Dawn in there. I think it's gonna be one of his best. And I'm not just saying that 'cause I'm the lead. It's just a great movie. I think everybody's gonna walk away from that movie with some opinion. It's a battle for our border, you know? People are really serious about what's going on with the border, and it shows the negative side of both sides. Everybody's gonna be pissed off."

One of the biggest surprises about Machete is the stellar cast list, which includes Robert De Niro, Steven Seagal, Michelle Rodriguez, Jessica Alba and Lindsay Lohan. 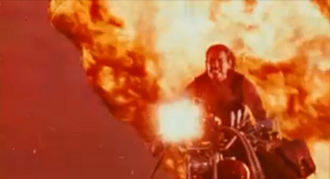 Trejo glowed with pride when asked about De Niro's involvement in the film. The two previously worked together in 1995's Heat. "When I first saw Robert De Niro on the set, he came up and his first words to me were, 'Don't make me like this, homes,'" Trejo told press. "You know, that was my line in Heat. And I kind of laughed, and he said, 'Man, Danny, I'm really proud of you. You're the lead. This is it, this is you!' And I looked him right in the eyes and I said, 'Can I get some coffee, Mr. De Niro?'"

Trejo and Rodriguez are so excited about Machete that they've already started knocking around title ideas for the sequels. "We want Machete, Machete Kills and Machete Kills Again," Trejo says with a laugh.

"They're fun titles," adds Rodriguez. "I do like Machete in Space, though."