Tag: Science
An ancient dinosaur relative is also related to humans—and its DNA may hold the secret to living longer
Tag: Science
Cretaceous 'hell ant' snags a baby cockroach in this rare chunk of petrified amber
Tag: Science
Earplugs! NASA heard the loudest sound that ever boomed in the universe, and it’s screaming a mystery
Tag: Podcast
Doctor Who: Christopher Eccleston regenerating as Ninth Doctor for Big Finish audio adventures

Darren Aronofsky's Protozoa Pictures has optioned the rights to Pandemonium, the disturbing debut novel of demonic possession by author Daryl Gregory. The notion is to develop the material for a potential TV series unfit for the sane or squeamish (or devoutly angelic).

Aronofsky, hot off his deal to direct the pilot for HBO's Hobgoblin, is bolstering his lineup with more dark psychological fare after the brilliant Black Swan tiptoed across the twisted alleys of our brains.

Watchmen screenwriter on how Darren Aronofsky suggested film's biggest change from the comic
Revisiting The Fountain, a masterpiece on dealing with grief through storytelling

The book follows an interesting, alternate timeline in which a cabal of scientists have accurately recorded thousands of cases involving demonic possession since the 1950s. These incidents mimic a predictable pattern of the hellspawn invading a body, going berserk, then merrily moving on to its next host. (Demons apparently have no manners.) 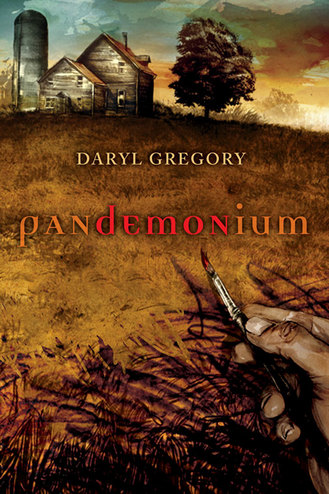 Its main character, Del Pierce, is a troubled, marginally psychotic young man whose personal demon enjoyed the hospitality a bit too much and never left. When he was 5 years old, a spirit known as the Hellion possessed him, and now it's back with a vengeance. Pierce embarks on a quest to exorcise his terrifying tag-along. The answers are contained in a handful of golden-age comics, demon-created paintings and his own repressed childhood memories.

Comics, demons and Jungian psychology in an episodic series? Color us in!

Gregory reacted to the news today with mixed emotions, noting that there are a "million steps" to go through from option to screen, and that:

"I know what you're thinking—why can't you just enjoy it when something positive happens? It's in my nature to immediately pop any balloon of good news, but today I will merely deflate it a little, by inhaling its rich, helium like gasses, and then talk in a funny voice for the rest of the day."

The novel's tone is seemingly in the vein of Fallen and Frailty, each with its admirable attributes, and could fill a gaping hole in sinister broadcast content left glaringly vacant since the canceling of Fox's somber morality nightmare Millennium. Maybe a home at HBO? Makes sense with Aronofsky's new partnership with that cable network.

Pandemonium, a finalist for the 2009 World Fantasy Award, also contains some cool insider references to classic works of science fiction, layering some added speculative fiction meat to its supernatural bones.

Gregory has also recently delved into the world of comics with his scripts for Boom! Studios' Planet of the Apes series and Dracula: Company of Monsters.

What do you think? Sound like a hella-good project, or doomed to be emasculated on television?