Dave Gibbons, co-creator of the acclaimed Watchmen graphic novel that serves as the source material for Zack Snyder's upcoming big-screen adaptation, told SCI FI Wire that he had doubted that anyone would manage to pull it off.

"It had been going on for so long that I just thought it wouldn't happen, because there wasn't a way to get the right script and blah, blah, blah," Gibbons said in an interview.

But now, finally, on March 6, the world will get to see how Snyder (300) brings to life the unique vision created by Gibbons and writer Alan Moore. Like the book, the film tells the tale of former masked crimefighters who band together when someone starts killing their old colleagues in an alternate-universe 1985 New York. SCI FI Wire recently spoke with Gibbons, and following are edited excerpts from that exclusive conversation. (There are spoilers ahead for anyone who hasn't read Watchmen.)

Be honest: Did you think anyone would ever get around to making a Watchmen movie?

Gibbons: I didn't seriously think they would ever get it done. It had been going on for so long that I just thought it wouldn't happen, because there wasn't a way to get the right script and blah, blah, blah. But it's nothing I have ever held out for and said, "Oh, I wish they'd make a movie of Watchmen. I wish they would." I always looked upon it as having a ticket in the lottery. It may come up, but it probably won't, and even if it does, you might win the jackpot, but you might only win a consolation prize. So the fact that it's come up and that it's come up in spades is fantastic.

When you and Alan Moore wrote the comic book, how filmic did you see the material being?

Gibbons: Comic books are often compared to movies because they share a lot of the same visual language, but actually telling a story in comic books is a slightly different thing. What we try to do is use all the tricks of comic books to tell our story. And, inevitably, there's a certain comparison you can make with the film, but Watchmen was very much a comic and not a draft for a movie.

As an artist you must be very sensitive to the visual look of a movie, especially one based on your own work. Do you ever look back on the various aborted versions of Watchmen and say, "I wonder what Terry Gilliam would've done with this?" Or is Snyder's version the only one that matters?

Gibbons: Well, I would have loved to scene the Terry Gilliam version of it. To cast no aspersions on Terry Gilliam, we might still be waiting for it. Terry has made and completed some wonderful films, and there's interesting speculation as to what he would have done with it. My mum was the one who used to give me all the news in movieland, because nobody got in touch with me or Alan at all. She said to me, "Oh, David, I read in the paper that that Monty Python man is going to be making a film of your comic. Oh, that'll be funny, won't it?" So I don't know quite what it would have been. I'm sure it would have been quite amazing, but I think Zack is a great director to have on it.

He does understand the material so well, and, I think, coming off the success of 300, he is in a position to get the movie made very much the way he wants it and not have to particularly compromise with the studio. And I know he was able to reintroduce a lot of elements into the movie that had been taken out of the script. So that's great. I couldn't be happier than I am with what Zack has done. 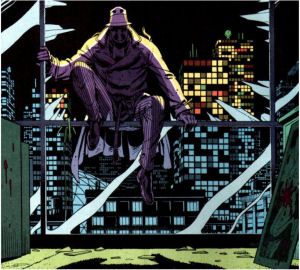 The makers of V for Vendetta used David Lloyd's art as storyboards for a number of the scenes. How closely does Watchmen reflect your work? And should it? The more it looks like the source material the better? Or is perhaps some distance from the graphic format preferable?

Gibbons: Zack's storyboards for this consisted of sketchbooks that had whole pages of the graphic novel pasted in and interspersed and broken up by his own storyboards. So my vision is very much being used as the storyboard. And even in the trailer there were two or three shots which were direct transpositions of things I'd drawn.

I think the most important thing is that Watchmen works as a movie, that it's a good movie. And I think that's the case even if that was at the expense of having particular compositions or particular flows of images taken out. That would have had to have been the way it was made. I take it as a compliment to my visual skills that so much of it has made its way into the movie. And it's not just my drawings, but also John Higgins' coloring, which so much defined the look of the comic book. That has made the transition to the movie as well, and that's very flattering to the both of us that our vision has survived.

Watchmen features a large, rich group of characters, most of whose backstories are only hinted at, actually. Had you and Moore ever considered a Watchmen prequel that might flesh out some of the stories?

Gibbons: Well, we did consider that at the time. We thought we might do a series featuring the Minutemen, very much in the style of a '40s comic book. It would have been quite innocent and quite wide-eyed. Of course, the twist would be that we all knew how badly everything was going to end. 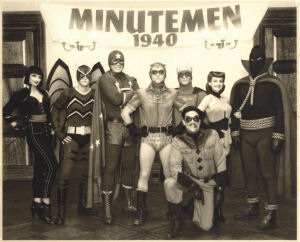 But I actually think that a lot of things in Watchmen work better as hints rather than full-blown exposition. There's the hint that Rorschach dropped this guy down an elevator shaft or just a hint that Dollar Bill died because his cape got caught in a revolving door. I think that somehow can be more potent than seeing every detail of that. Interestingly enough, Zack has done something similar in the opening sequence, where, to use the Dollar Bill sequence as an example, he doesn't show the whole thing of Dollar Bill trying to stop the bank robbers, getting caught in the door, getting gunned down, the whole thing. We maybe see Dollar Bill slumped on the floor, shot, with his cape tangled in the door. It's a shot that lasts about five seconds, and that's all you have to see to know what's going on. I think that approach works well in the movie, too.

Typically Moore only works with a particular artist once. You've worked with him on several projects. Do you think you'll ever work with him again?

Gibbons: Alan and I worked on a whole load of short stories, and then we did Watchmen, and then we did an issue of The Spirit, which was wonderful to have the chance to be the first people to interpret Will Eisner's classic Spirit stories. It's not because of any falling out that we've worked together so seldom. The thing is that with a writer like Alan, who is fairly prolific, it's very hard for an artist to keep up with him. Plus, I think it brings a certain interest to what Alan does to work with different artists. And he's very good at tailoring stories to fit a particular artist. Had I drawn V for Vendetta, it would have been a very different piece than what David Lloyd drew, and vice versa if David had drawn Watchmen, not only because of the story, but because of the whole way Alan would have changed the thing.

Watchmen: How the comic ending affects the HBO series
Manners maketh the release date: Kingsman 3 will arrive in the fall of 2019

I think that's one of Alan's great strengths, that he works with different artists and he knows exactly how to play to what they can do well. As for working with him again, I'd always be open to it, and I think Alan would always be open to it. He has distanced himself from mainstream comics, but he has got a book project coming out in a couple of years that I have already agreed to do some illustrations for. So anything can happen. It's comics.