David Goyer: Everything you need to know about FlashForward

David Goyer, co-creator of ABC's buzzworthy sci-fi series FlashForward, wants to let you know that everything you know is wrong.

That is, everything you think you know about his new series, which he is executive-producing with Brannon Braga and Marc Guggenheim, based on the book by Robert J. Sawyer. Goyer spoke with us on the show's set on the Disney studios lot in Burbank, Calif, on Monday, along with stars Joseph Fiennes, Dominic Monaghan, Jack Davenport and others.

In the series, everyone in the world blacks out for 2 minutes 17 seconds, during which time each person has a glimpse of the future and their lives on a specific date: April 29, 2010. The show's characters will spend the bulk of the first season figuring out what will come true and whether they can alter the predictions.

Here's Goyer's and the other's list of things FlashForward is and a few things it isn't.

FlashForward debuts Sept. 24 and will air Thursdays at 8 p.m. 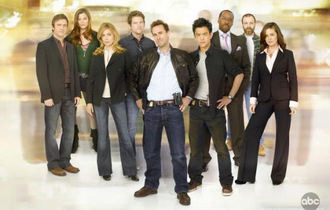 1) It's not Lost 2. This is the biggest bugaboo the producers have to deal with, though they themselves have said they're flattered by the comparison.

"I think, really, aside from the fact that it's big and cinematic and there are a lot of characters, I think as soon as people see the episodes the comparisons will stop," Goyer says. "Although I love Lost."

Former Lost cast member Monaghan, who plays Simon in FlashForward, agrees. "Look, it's inevitable that when you do a show that's on the same network with the same kinds of aspirations, it's going to be compared to Lost. I think very quickly it will set out its own footprint, and people will understand the distinctions between the two worlds. So, for me, it's not a huge thing or problematic." 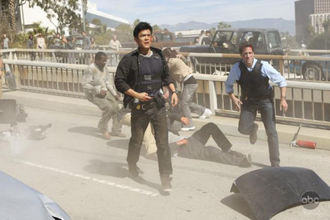 2) It is big and cinematic. In the pilot, we see the near-destruction of Los Angeles, massive car crashes and a helicopter slam into a building. Footage previewed for us on Monday revealed even more big set pieces, including the sinking of a city bus into a park lake in the middle of Los Angeles.

"We really are telling, in some ways, like, a 24-hour movie, in a way," Goyer says. "My aim is to sort of do what I do best, which is really welcome these characters into your home, really dig deep into them in a way that you really can't do with movies. I have a lot of respect for what [Lost and Fringe creator] J.J. [Abrams] does. I think he goes for it. I think his shows, they don't feel like cheesy TV shows."

Goyer adds: "If you look at this season as a whole, not all the pyrotechnics happen in the pilot. ... We definitely did some things in the first eight episodes already that I don't think people have ever done on television before. I love it when they say, 'You want to do what? We don't do that on television.' And I say, 'Well, we're not shooting this like a TV show. We're shooting this like a feature, so suck it up.' Sink a bus. Right, they're like, 'You can't do that with real people.' And I'm like, 'Well, we're doing it, so let's figure out a way to do it.' 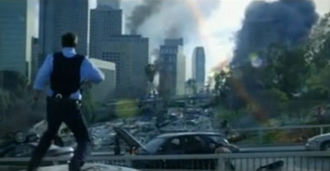 3) It's not a science fiction show.

"I mean, there's one [sci-fi gimmick], the flash-forwards," Goyer says. "The audiences won't know for a couple of years what the ultimate cause of them were, so I don't think it really matters."

Beyond that, says co-star Davenport, who plays physicist Lloyd Simcoe (the only character carried over from Sawyer's book): "The high-conceptness of this is kind of gotten out of the way very quickly. The event occurs, and then we're kind of left with the repercussions of it. The phrase that David used was an intimate epic, and I thought that was very elegantly put. And it is that because one of the things that we find we can't when we get new episodes is the parameters of the stories is sort of unlimited. You basically have 6 billion people with knowledge about their futures. You can do anything you like with that."

(Between us, it really is a science fiction show in the same way Lost is, but we'll give them the benefit of the doubt for now.) 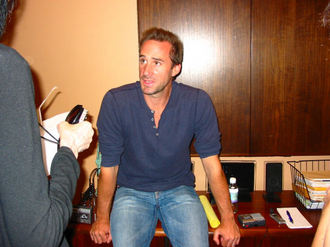 4) It's the story of one man's struggle to avoid a hellish future. Joseph Fiennes' FBI agent Mark Benford, whose life is going well, catches a glimpse of himself back on the bottle, divorced from his loving wife, obsessively tracking a case and targeted for execution by unknown assassins. And that's just in the pilot.

"We're going to see a man taken to the brink, taken to the extreme," Fiennes says, adding: "Everything's beautiful, and it's great, ... and then suddenly the world comes crashing down. ... We're going to see him being ripped apart, tested. ... And it's really about the moral boundaries that you're prepared to cross, or you're having to confront, in order to change the future, change the outcome of what you see." 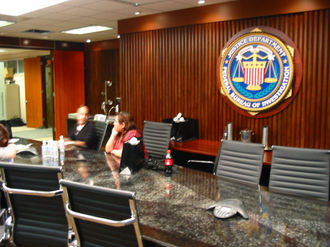 5) It's not a procedural. Though it deals in part with the FBI investigation of the flash-forward phenomenon, and several of its main characters are agents, the show won't dwell on the cop elements or case of the week, a la Fringe. Other characters are doctors; still others are everyday people.

"It's very much about human relationships," Davenport says. 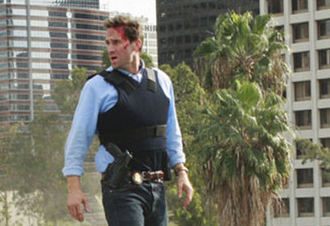 6) It's not like anything you've ever seen on television.

"What it is is a very ambitious story with a lot of layers and a lot of plot twists and a lot of interesting things happening in it," show runner Guggenheim says. "What it's not is an impenetrable Byzantine puzzle box."

As if to underscore the show's oddness, Goyer screened a few other clips from the first four episodes on Monday: One highlighted a very broad humorous exchange between the otherwise world-weary FBI agent Benford and his FBI handler Stan Wedeck (Courtney B. Vance), whose flash-forward takes place in the bathroom. Another showcased a grim telephone exchange between John Cho's Demitri Noh (Benford's partner) and a mysterious woman (played by 24's Shohreh Aghdashloo) in Hong Kong, in which she warns Noh that he will be murdered on March 15, 2010. (Goyer confirmed to SCI FI Wire that Aghdashloo will be a recurring player in FlashForward.)

A third clip goes back to the day of the flash-forward, in a park in Los Angeles, in which everyone falls to the ground in slow motion, backed by the quirky music of Bjork's "It's Oh So Quiet."

"We picked those three scenes to kind of show you the different gambit of the things we will be doing in the show," Goyer says. He added: "There are scary moments, there are, we hope, funny moments, heartbreaking moments, thoughtful moments, sexy moments. So we just decided to pick three different kinds of scenes."

(Click on the images of the show's sets below for larger versions.) 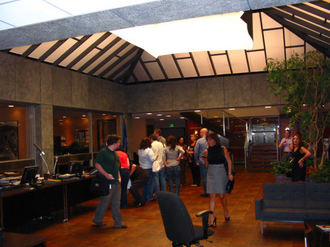 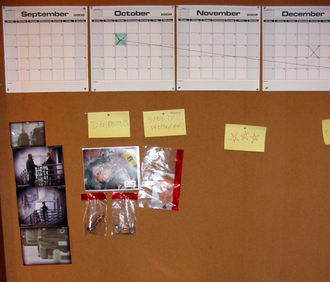