DC 'not having this conversation' about guy who really created Batman

There has been a grassroots fan backlash for a while now in support of the late Bill Finger, who worked behind the scenes with Batman creator Bob Kane to conceive Bruce Wayne and his epic mythology. Now, well, it seems DC is tired of talking about it.

To this day, Finger remains largely uncredited for his work on the character, which helped flesh out much of his background. Marc Tyler Nobleman wrote a book on the matter, dubbed Bill the Boy Wonder: The Secret Co-Creator of Batman, and recently released some correspondence he had in 2007 with DC on the matter.

DC unveils 4 new animated films for 2021, including 2-part Batman: The Long Halloween
Christian Bale explains why he turned down the offer to make a fourth Dark Knight film

Here is his initial message to DC:

"Could Bill's name be included in the credits for The Dark Knight? Please don't automatically delete! I know contractually DC can't call him "co-creator" so I rather mean something along the lines of "Batman was first called 'the Dark Knight' in Batman #1, in 1940, in a story written by Bill Finger." DC publications already regularly credit Bill for that story, so I see this as completely compatible, legally safe, and of course morally fair. After all, the movie's title doesn't even include the word "Batman"--it is wholly a phrase coined by Bill Finger. I look forward to your response."

The company shot back a short, polite response:

"Thanks for your passion for our creators and characters, but there are no plans to credit Bill on The Dark Knight."

To which Nobleman shot back:

"To be clear, I am asking if Bill can be credited only for the coining of a phrase, in unambiguous language. ... Isn't that just as permissible (it seems even more so) as your regular practice of crediting him in reprints for entire stories he wrote?"

Finally, the DC representative had enough, and ended the conversation with:

"With all due respect, I'm not having this discussion."

So, there you go.

Interestingly, DC nearly gave Finger credit when Tim Burton's Batman flick came out, as shown by this correspondence Nobleman was able to dig up between DC and Finger's ex-wife: 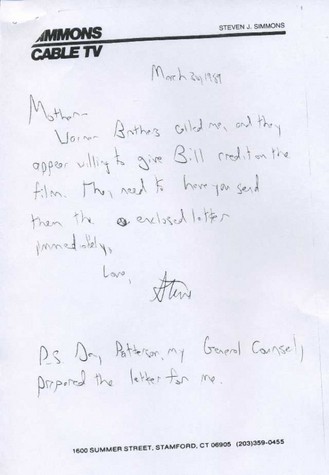 But those talks fell through later on, and the credit never came.

What do you think of the debate over Finger's contribution to Batman lore?