Death Star beats out the Enterprise and TARDIS as best starship

Every year at the end of Comic Con a panel of august and learned sci-fi scholars debates the weighty issue of which starship would defeat which other starships in a fictional battle of bragging rights called Starship Smackdown.

The ships pitted against one another are chosen by a combination of panel and audience suggestions, and in later rounds fictional captains are added into the mix. This leads to fanciful match ups like last year's NCC 1701 piloted by Captain Jack Sparrow squaring off against the Pegasus piloted by a combination of Captain Quint and Captain Crunch. (The NCC 1701 won that particular bout if you're wondering.)

Last year the J.J. Abrams version of the Enterprise piloted by the William Shatner version of Kirk fought to an honorable draw with the NCC-1701 helmed by Jack Sparrow for the top co-honors. 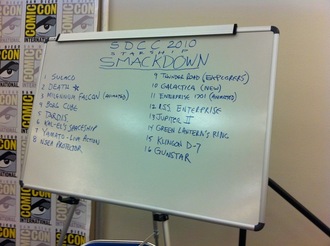 This year the 16 ships (and things that dubiously met the criteria for "ships") in contention included the first-round match ups of:

Video of the entire event will be up on YouTube soon so you'll be able to see the debate for yourselves, but Starship Smackdown XVIII winner was the Death Star piloted by Skynet, which bested the ISS Enterprise piloted by the MCP for the crown.

We strongly disagree with this and feel the Death Star would not have escaped the first round fight with the updated Battlestar Galactica, but a panel including Robert Meyer Burnett, Chris Gossett, Ashley E. Miller, Steve Melching, Robert Hewitt Wolfe and Kay Reindl, moderated by Mark A. Altman, thought otherwise.