Though flying saucers were all the rage in the 1950s, the U.S. Air Force spent the decade debunking accounts of UFOs hovering over America. Of course, we'd expect them to deny knowledge of any flying saucers, especially since it turns out they spent two years in the '50s trying to build their own. No, really.

The National Declassification Center (part of the National Archives) has just released documents from a 1956-57 Air Force venture known as "Project 1794," which was basically a government plan to build a flying saucer. It sounds crazy, but excerpts from the official reports generated by the project show that Air Force researchers really believed they could pull it off.

"It is concluded that the stabilization and control of the aircraft in the manner proposed -- the propulsive jets are used to control the aircraft -- is feasible and the aircraft can be designed to have satisfactory handling through the whole flight range from ground cushion takeoff to supersonic flight at very high altitude."

The Air Force's new multi-rotor flying car is straight out of a Dr. Seuss dream
Someone just spotted a top-secret Air Force space plane in orbit and we don’t know why it’s there

To put this plan into action, the Air Force contracted Canadian company Avro Aircraft Limited to draw up schematics for a ship that looked very similar to something you might see in a 1950s sci-fi picture about visitors from another planet. Take a look: 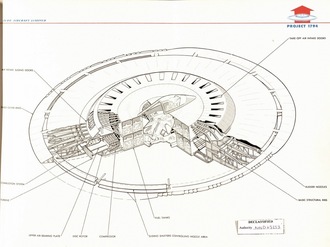 Very saucer-like, isn't it? In the end, the project cost the Air Force more than $3 million (more than $26 million today) and apparently never really got past the "initial phases of research and development." But there was a prototype, at least. Avro developed a saucer-like contraption known as the "Avrocar," but as you can see from this footage, it didn't get very far.

Of course, this could all just be what the government wants us to think. What are the odds that there's a perfectly working saucer floating over Earth right now, with U.S. military personnel at the controls?