Did a Canadian trapper capture an amazingly clear photo of Bigfoot?

We've seen a lot of alleged images of Bigfoot over the years, and almost all of them seem to be either taken from too far away or are suspiciously blurry. Now a trapper on a trail in Alberta has snapped an unbelievably clear image of something Bigfoot-like ... but is it the real thing?

We don't know who the trapper in question is, or when and how the photo was taken. All we have is the image, posted to Facebook by a friend of the photographer (who wasn't there). Check it out:

Is this viral video evidence that Bigfoot really is out there?
So the FBI released some Bigfoot files. What are the chances the sasquatch is real? 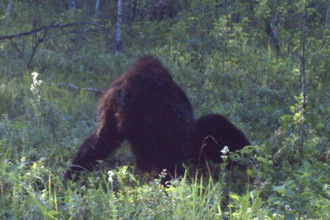 It's not perfect, but it's definitely a close and fairly clear image of a big hairy thing lounging in the grass. People are always skeptical of Bigfoot sightings, but the fact that this one seems so clear, and the fact that the photographer apparently only snapped a single image, raises a lot of questions.

How do we know this isn't a gorilla sitting in some kind of containment? How do we know it's not a bear, or two bears? Wouldn't it be great if we could see the face?

Whatever it is, the lady responsible for posting the pic, who identified herself only as "Penny," said the photographer is definitely reliable.

"I know this person. They are a dogsledder and would in no way be the type to try to fool around with fake pictures. They actually think it's a bear and cub but for some reason they only have one photo. Strange."

Well ... that started out as a reassurance and ended up raising more questions than it answered, but whatever. What do you think? Bigfoot, other animal or your basic hoax?