If you're a fan of Pixar, then you know they don't crank out sequels. Matter of fact, in their 15 years making 11 computer-animated, full-length features they've made exactly two sequels: Toy Story 2 (1999) and this summer's 3-D Toy Story 3.

How alebrijes sprung from a fever dream into magnificent life in Coco
Science Behind the Fiction: The Incredible physics that power The Incredibles' superpowers

Because the Pixar creative mantra is always "story first." No story = no movie. And that's why it's taken 11 years to produce the latest (and probable last) story about Woody the cowboy (Tom Hanks), Buzz Lightyear (Tim Allen), Jessie the cowgirl (Joan Cusack) and the rest of Andy's beloved toys.

In an exclusive interview with SCI FI Wire last month in New York City, Toy Story 3's director, Lee Unkrich, revealed that The Lord of the Rings was actually a key inspiration.

"When we set out to make Toy Story 2, we knew there weren't many good sequels out there," Unkrich said frankly. "There are only a few, like The Godfather Part II and The Empire Strikes Back and not many more. So it was really an honor for us when Toy Story 2 came out that a lot of critics likened our work to those films in terms of being a sequel that's at least as good as the original.

"In setting out to do three, of course, what good third films are there?" he added. "Now, I wasn't counting series like the James Bond films, but the only one I could think of was the third Lord of the Rings film. It's a solid, good film, but then I thought it wasn't really fair, because it's part of one big story and not a sequel per se. But when I thought about it, that's when I personally had an epiphany and thought that I need to think of this film as part of a large story. I need to think of Toy Story 1, 2 and 3 as being one big journey emotionally for these toys, for Woody in particular, and that's what we set out to do with this film."

Toy Story 3 opens with Andy Davis ready to leave for college. He packs up his beloved toys to be stored in the attic, but they get donated to Sunnyside Day Care instead. What initially seems like nirvana for toys quickly becomes a nightmare as the gang get beat up by a classroom full of drooling, destructive toddlers. Meanwhile, Andy realizes the mistake and works to reunite with Woody, Buzz and his childhood plastic pals.

Unkrich said the idea of leaving childhood behind for adulthood and the impact it would have on the toys actually came out of a failed first idea for the sequel. 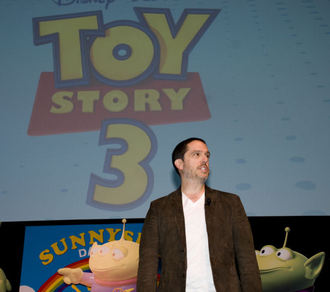 "We actually had an idea for years, but the political machinations between Pixar and Disney prevented us from making Toy Story 3," Unkrich revealed. "Luckily, when Disney finally ended up buying the studio, that opened up the floodgate of freedom to finally make the sequel. Interestingly enough, the sequel that we thought we were going to make for Toy Story 3 for all those years is not the movie we ended up making. We started talking about it and really getting deeper into it, and we realized it was a cool concept but it wasn't a deep enough story to sustain a feature. That panicked us, because we never wanted to make a sequel just for the sake of making a sequel. We wanted to do it because we had a good story, but all of a sudden we found ourselves wanting to make a sequel but not having the story. We felt like we were doing it all backwards. Luckily we pounded away on it for a couple of days and talked about what was really important to us and how we could tap the emotional depth of the stories we had told so far. We came up with what over four years is now Toy Story 3."

Of their very satirical take on the iconic longtime beau of Barbie, Unkrich admits they didn't get any notes of concern from Mattel.

"Anytime we are using another toy company's toy, we tread it very lightly," he said. "We have a long relationship with Hasbro and Mattel, and they trust us. We've done some great things with their characters in the past, so we were very up-front with them in the beginning as we talked about this particular Ken we envisioned. He's maybe not the brightest guy, very into clothes, and we're creating this conceit of a Ken that had never met a Barbie, and a Barbie that had never met a Ken or known of their existence, which we thought was very funny. We pitched our take on Ken to Mattel, as well as this particular Ken from the '80s we wanted to use. They were on board completely. We also shared with them an early pitch of the movie so they could see how Ken was being used in the film. I can't speak to whether they were nervous in any way at all, but at the end of the day I think we did a good job respecting the character but making him very funny and particular as well." 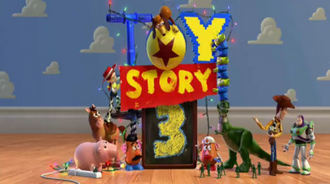 With the final film almost complete (it was screened for the majority of the main vocal cast last week), Unkrich said he's really pleased with how they managed to balance the large cast of old and new.

"It's hard with a sequel like this, because we already have so many characters and we've added a lot more," he said. "It's a huge challenge to have so many characters, because we are trying to make, more or less, a 90-minute film that has a lot of story in it, but you don't want to short-change any of the characters and give everyone their due. A big part of our work over the last four years was trying to find that perfect recipe to be true to the characters but not make a five-hour movie. We do have new characters and explore several of them more deeply than others. I think every one of them fits very nicely into this world and stays true to who they are and who the characters were in the other two films."

Asked if this installment is meant to be the last, Unkrich said with finality, "I tried to tell a complete story in developing this story. I can't say how the movie ends, but I think people who watch the film will have a full emotional journey, and we have also had a big emotional journey in making it."