Michael Dougherty, the director of the buzzworthy but yet-to-be-released genre-bending horror movie Trick 'r Treat, hit Comic-Con in San Diego again to tout the movie, with the home stretch in sight: a release date sometime this October.

"We have a month," Dougherty told SCI FI Wire in an exclusive interview. "Yeah, we're told October. But don't have a specific date yet."

"Well, I mean there're four Tuesdays in October, so it's bound to be one of them," he said. "I would prefer an early October date, because I think that gives the film the time to pick up steam. That I think it needs. Because I think this is a movie which—it's already got great word of mouth, thank God, but I think when it really hits ... the Wal-marts and the Amazons, ... it's going to take good word of mouth amongst the general population for it to really get out there."

It's been a long slog to get the Halloween-themed movie before the public, though it was finished two years ago and has garnered rave reviews in preview screenings. We've seen it, and we've been singing its praises for months now and are eager to see it finally get a release. 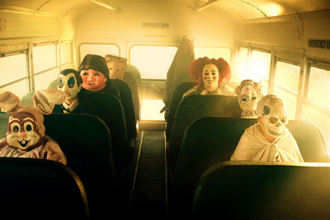 "It is said that Halloween is the night when the dead rise to walk among us and other unspeakable things roam free. The rituals of All Hallows' Eve were devised to protect us from their evil mischief, and one small town is about to be taught a terrifying lesson that some traditions are best not forgotten. Nothing is what it seems when a suburban couple learns the dangers of blowing out a jack-o'-lantern before midnight; four women cross paths with a costumed stalker at a local festival; a group of pranksters goes too far and discovers the horrifying truth buried in a local legend; and a cantankerous old hermit is visited by a strange trick-or-treater with a few bones to pick. Costumes and candy, ghouls and goblins, monsters and mayhem: ... The tricks and treats of Halloween turn deadly as strange creatures of every variety—human and otherwise—try to survive the scariest night of the year."

It's been this arduous process to do this thing.

Dougherty: You're telling me. 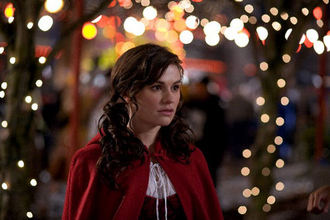 You've had the screenings and the buzz is always great for this movie. Whenever you show it, people are like, "Why aren't you letting this movie out?"

Dougherty: You know what? I think, "Yo, go ask Warner Brothers." No, I take that back. It's a quirky horror movie. It's not an easy sell. ... It's not a remake. It's not an adaptation. It is probably a dangerous mix of all the elements a film studio typically shies away from. You have anthology format, which has been a dead format for 15 years at least. You have horror comedy, you know, two genres that studio people tend to get very nervous about mixing, because the results are always unpredictable. So, you know, it's not a sure bet. It's not five ... twentysomethings pretending to be 17-year-olds going out in the wilderness and getting slaughtered one by one. It is a very different beast. ...

I remember having a conversation with, you know, an executive who shall remain nameless about this, and he said, "Oh, it's a horror movie." And I said, "Well, yeah." He goes, "Well, we'll target the Saw and the Hostel demographic." And I said, "No, no, no, that's not them." "Well but they're the horror audience." "No, they're not this horror audience." ... Horror itself isn't just a genre. There's so many subgenres to it, just like there's so many types of comedy. You have your Wayans Brothers comedies and you have your Judd Apatow comedies. Very different audiences. And so ... sometimes it can be difficult to try to explain horror as a genre to people.

Do you think they're starting to get it, though?

Dougherty: Oh, yeah, totally. Totally. The studio's been fantastic lately because ... I think they really saw what it is, they understood that it's a cult film, in a way. That there actually is a very target specific audience, specific target audience to build from. You know, Comic-Con being a perfect example of people who love films—love genre films specifically—but are also open to different types of quirky, weird movies. I think the consensus is that if it's meant for the mall audience, then it does have to rely upon a certain amount of conventions. I don't know if that's true necessarily, but last year Let the Right One In was one of my favorite films. Great vampire movie. Would that play in middle America? No idea. ...

I think the upside of it is that it's had a really long time to build word of mouth. I'm a big believer that if you're going to do marketing, sometimes it's best to have a really long marketing campaign. I actually feel like District 9's campaign has been really brilliant, because they started planting their "For Humans Only" signs a year ago at Comic-Con. ...

So I think it's kind of nice that a little film like this has had the opportunity to kind of build word of mouth and buzz for literally two years. And you, know, create this question mark of where is it, how can I get it, and finally we're giving them an answer.

It probably doesn't hurt that Anna Paquin's on TV every week.

Dougherty: Yeah, True Blood, I think, I think the timing for that is fantastic. ... It's kind of funny. I love the show, too. I think it's very similar in that it's very quirky, tongue-in-cheek horror. So I think that it helps that the show is good, she's in it, and that she's got a brand-new fan base of people who love her in this kind of genre.