Doctor Who actress addresses all those lesbian plotline rumors

Remember when we told you last week about that rumored Doctor Who lesbian plotline for the upcoming season seven? Well, the actress at the center of that sexy business is sounding off on the subject. What does she have to say?

Actress Neve McIntosh, who played the über-cool samurai-sword-wielding (and lesbian) Silurian warrior Madame Vastra in the season-six episode ''A Good Man Goes to War,'' has downplayed the reports of her character's return to Doctor Who in a lesbian storyline that had her falling for the Doctor's (Matt Smith) new companion Clara (Jenna-Louise Coleman).

Russell T. Davies is back at the helm of Doctor Who: 5 things that could mean for next season & beyond
'Doctor Who' writer Russell T. Davies, architect of the show's revival, to return as showrunner 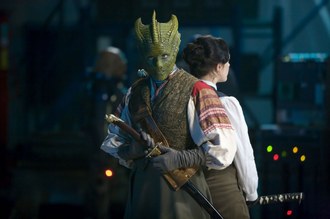 The rumored story originated over at the Daily Star, and since then the actress has taken to Twitter to dismiss those rumors, saying: ''Just to say I have no idea WHAT the Star is talking about! No-one's asked me... ''

As for a possible return of the character on the beloved sci-fi show, McIntosh told a fan: ''I wish... Still thinking up plot lines to pitch to mr Moffat''

When another Twitter user pointed out that Doctor Who fans wouldn't likely believe the actress' denials over the Daily Star report, the actress admitted: ''I know cos even if it's true I can't say! But really we're talking about the daily star....''

So do you guys think there's still a bit of truth to that Doctor Who lesbian episode rumor and that Neve McIntosh is simply trying to steer Who fans' attentions away from a spoiled plotline? Or do you believe the actress and think that there's simply no truth to the rumored story?