Doctor Who's Rory talks season 7, the Daleks and why he's leaving

Actor Arthur Darvill believes you're going to cry. And, in fact, he feels a little blue himself when it come to saying goodbye to Rory Williams, his heartfelt character on BBC America's Doctor Who. Darvill and Karen Gillan, who play the Doctor's married companions, Rory and Amy Pond, will be leaving the series in the fifth episode of season seven, and yes, he thinks it's the kind of ending that will make you weep.

"Me and Karen made a decision to leave when we did, but we're definitely going to miss it," said Darvill in an exclusive interview with Blastr. "It does feel like the right time to move on. The worst thing you can do is outstay your welcome on something like this. We've had such a good run and such good stories, but the whole program is about change. It's about things changing and evolving. So it's sad to leave, but it feels like the right thing to do."

Darvill joined Doctor Who in 2010 at the beginning of season five as Rory, Amy's "sort of" boyfriend. Throughout his journey on the series, Rory has been Amy's boyfriend and then husband; he was absorbed by a crack in time and space and erased from existence; he was turned into a Roman Auton soldier who was forced to shoot Amy but then watched over her as the Last Centurion while she was in stasis for two milliennia; he helped save the universe; he conceived a daughter with Amy who turned out to be River Song; and he became the Doctor's father-in-law.

So it's been a busy couple of years OR a little more than two milliennia, depending on how you look at it.

"Yeah, it's a little much, waiting 2,000 years for someone and all that stuff," said Darvill with a laugh about Rory becoming the Last Centurion. Rory and Amy's adventures are "a really romantic story. ... We didn't know where it was going to go when we started. Every time we got a script it was so exciting just for us to find out what would happen next.

"I love what's being done with all the twists and turns, and I think it makes it TV that you can watch over and over again and get something more every time you watch it. You kind of notice all the little details that are in there that at the time, we don't know the significance of certain things until things pop up later in episodes and you go, 'Oh, that's why he did that.'" The "he" is executive producer Steven Moffat, who drives the creative ship on Doctor Who.

It's all led to an epic story where Rory has become so much more than just Amy's sort-of boyfriend, he said. 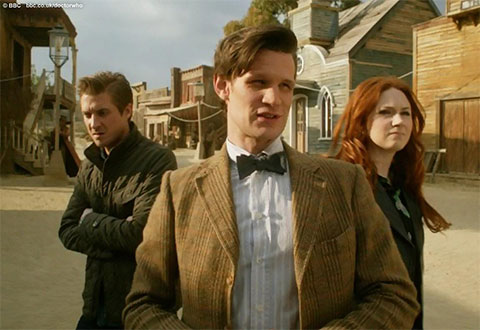 When Darvill joined Doctor Who, "I did think it would be three or four episodes. It's been really surprising, just how integral Rory has become as part of the team. I think that was the most surprising thing."

He initially thought "Rory would be this kind of awkward character, but I've really enjoyed the challenge of having the real hero moments that Rory's had. And that was something that I didn't expect when I first started. That was a challenge, but a really good challenge," he said.

When he got the job, "I kind of expected to go to work with Daleks every day. I hadn't had the chance [to be in an episode with the Daleks], and this opener is a massive, massive Dalek episode, and it's brilliant," said Darvill. "It's just phenomenal. It's a really, really good episode. So I was pleased to tick that box before leaving."

While the season, which premieres tomorrow on BBC America at 9 p.m. ET, opens with Daleks, there are plenty of other monsters and challenges ahead for Amy, Rory and the Doctor. And that includes having to face the terrifying Weeping Angels for their final fifth episode. But how it all ends he's not saying.

When Darvill read that final script, "it was just the perfect ending to this story. There's a lot of surprises. It's going to be quite a weepy episode, their final one, but the episodes leading up to that are just so strong. Each one's like a different movie, really. Each episode is huge, really epic, but we all get a really good bash at something," he said.

Through it all he's loved seeing how Rory has evolved.

"I think it's quite a rare thing, 'cause he's an entirely good person. He never actually does anything bad or anything unkind. His heart is completely in the right place, and he just wants everyone to be okay, for everyone to be happy and safe. All from someone who struggled with quite a lot of confidence problems at first and then really got a chance to come into his own. So there's a real journey in the character over the course of three [seasons]. It's been great, because it's been me kind of growing up over the last few years with a character who's constantly changing and constantly growing up himself," said Darvill.

"As an actor, I wanted to do different things, and, for me anyway, I'm quite an impatient person. I want variety in stuff. So signing onto something for so long was a risky thing to do. It's so easy to get bored. But with the scripts that were thrown at us there wasn't a chance of that ever happening, 'cause it wasn't just turning up to work to do the same thing every day. It was something new every single day. Something new to explore about the character. So yeah, I'm completely grateful to Steven [Moffat] and the rest of the scriptwriters for really, really pushing the characters and pushing their relationships."

For Darvill, "it's really good TV, and I think it's been getting better and better over the last few years. I'm really proud of the work that we've all put into it, and I got the chance to work with really astonishingly talented people," he said. 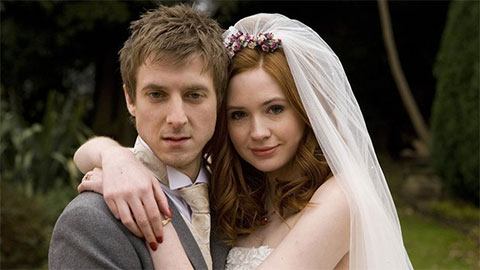 "I think we've been blessed having Steven in charge of it. He really cares about it, and he really wants to make it good. I think it is the type of thing that could go on forever, as long as it keeps changing. I think people at first go, 'Oh, no, you can't change it. You can't get a new Doctor!' You know, all of that. But actually that's what the show's about, and that's what keeps it good, is by constantly reinventing it. Doctor Who must be such an exciting thing to write, because the possibilities are endless and you can really mess with people's heads. Which is what Steven does so well," he said.

For Darvill it all adds up to a thrilling new season of change that will see astonishing new adventures for the Doctor and a "perfect" ending for two very beloved and unique companions. Then for Doctor Who it's a break until the Christmas special, which will introduce the Doctor's new companion, Jenna-Louise Coleman. The final eight episodes of season seven will air next year.

But just because Doctor Who's coming to an end for him doesn't mean he's not going to be busy, said Darvill. He's gotten right back into acting and writing music. Chris Chibnall, one of Doctor Who's writers, wrote a part for Darvill in his new series, Broadchurch, as a priest. David Tennant (aka the tenth Doctor) also stars in the series.

Beyond that, he's started a new band, is writing new music and he's been cast in a play called Our Boys that will run in the West End in September.

So while Darvill begins another chapter in his life, we'll see the Rory's final chapter in Doctor Who.

"I'm just really excited about it airing so I can actually talk about what happens in it. It always gets to this point before Doctor Who goes out and you're like, 'Aw, there's so much I could say but it would just ruin it for everyone.' But I kind of want to reiterate, it is such an exciting series. Amazing guest actors on it and just really good stories ... Really good stories," he said.

"It's one of the best things I've ever done in my life," said Darvill. "I think people, when they leave a show, they can kind of separate themselves from what they've done. But I'll always be proud of the work that I've done on Doctor Who. I've learned so much doing it and had such an amazing time doing it. It's given me such a great start in everything. I still feel fairly early on in my career, and it's a really good foundation."

Here's a look at season seven:

Doctor Who airs on Saturdays at 9 p.m. on BBC America.