Does the new Sherlock Holmes film honor or ignore Doyle?

There's a movie coming out on Christmas Day called Sherlock Holmes. You may have heard of it. But is it "Sherlock Holmes"? That is, is it true to Arthur Conan Doyle's creation as expressed in four novels and 56 short stories written between 1887 and 1927?

The filmmakers told reporters in London last week that they went back to Conan Doyle's original stories about the world's most famous "consulting detective" whenever possible to get details and characteristics right for the new movie adaptation.

"We kept constantly referring back to Sir Arthur Conan Doyle's stories," said producer Lionel Wigram, who provided the film's story. "Every scene in the movie, we tried to have at least one piece of Arthur Conan Doyle dialogue, and we just kept going back and back and back and really harvesting those amazing stories, which are so rich, for as much detail as we could put in there. It was essential to us. There's a reason why Sherlock Holmes has lasted 122 years, and it's because the stories are so good, and he's created such amazing characters in Holmes and Watson. We really wanted to maintain that."

That said, the movie is an original story designed to appeal to contemporary audiences, with a fast style, lots of action, big visual-effects set pieces and a hint of the supernatural. American actor Robert Downey Jr., best known as Iron Man's Tony Stark, plays this revisionist Holmes, with Jude Law as a young, vital Watson. It's no accident that the film is directed by Guy Ritchie, best known for his series of modern tales of criminal London.

"It's subjective, obviously, and it has to come through some sort of creative conduit," Ritchie said in a news conference in London's Freemason's Hall. "I was, as the director, to some degree that conduit. But from a very young age, I had an idea, an image, of Sherlock Holmes and the partnership [with Watson]. So I feel as though I'm informed by and I drew most of my creative ammunition from Doyle. But it's subjective. Every other production, obviously, has to deal with that that came before it."

Says Downey: "I think a lot of the flaming hoops we had to jump through doing Sherlock were 'How do you take what comes from the source material, and how do you amend it so that it's accessible? And how do you not whitewash it, but how do you still be respectful to that?'"

He adds: "There were times when we were so locked into exactly as Doyle expressed it. You can't beat the guy's words, so we had one of his quotes on a call sheet every day. But then we had to twist it up a little bit."

We've seen the film and consulted a number of Sherlock experts to take a look at a few things the film gets right and a few it doesn't. You can decide for yourself how faithful the new adaptation is when it opens.

To its credit, the new film corrects a number of problems with earlier adaptations (not including Granada Television's widely praised British series The Adventures of Sherlock Holmes, starring Jeremy Brett).

♦Watson isn't a bumbling idiot, but rather more of an intellectual equal and partner with Holmes.

♦Holmes never wears a deerstalker hat, smokes a Meerschaum pipe or utters the phrase "Elementary, my dear Watson," none of which ever appeared in Conan Doyle's stories. (Downey's Holmes does wear a hat—a modified fedora of his own choosing—and smoke a pipe, though a more traditional one.)

♦The movie dispenses with such Holmes cliches as the oft-quoted phrase "When you have excluded the impossible, whatever remains, however improbable, must be the truth." 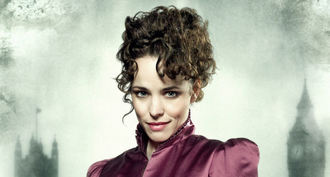 But the movie does take a lot of the physical action and violence implied in the stories and makes them explicit. In particular, Homes and Watson frequently fight bands of bad guys with fists, a steampunk version of a Taser, fighting sticks and swords and even pistols. In another sequence, we see a half-naked Holmes engaged in a bare-knuckle brawl, a la Fight Club, and in another scene, we see Holmes fighting a martial-arts-adept Asian man.

Aside from the Taser (and a rudimentary pistol silencer that Holmes toys with in the movie), many of the film's weapons and even its implied martial arts can be sourced to Conan Doyle, according to the Movie Moron Web site:

Holmes and Watson both carry canes and pistols, but the guns don't get much of a work out, only being used seven times in all the stories. Although Watson describes Holmes as an expert with a sword, he never actually demonstrates this in the books. However, Holmes is more than willing to use his fists. In The Sign of the Four, Holmes introduces himself to a prize-fighter as: "The amateur who fought three rounds with you at Alison's rooms on the night of your benefit four years back." McMurdo responds by saying, "Ah, you're one that has wasted your gifts, you have! You might have aimed high, if you had joined the fancy."

In "The Adventure of the Empty House", Holmes tells Watson how he used martial arts to overcome uber-villain Professor Moriarty at the Reichenbach Falls. He states that "I have some knowledge, however, of baritsu, or the Japanese system of wrestling, which has more than once been very useful to me."

Indeed, the biggest departures from Sherlock canon appear to deal with the women in the story. A major character in the film is Irene Adler (played by Rachel McAdams), who appears in only one Holmes story, "A Scandal in Bohemia." The character is considerably beefed up for the film, with an implied romance that is completely new.

Holmes seems pretty asexual in general and the only woman he ever showed major interest in is Irene Adler. According to Watson, Holmes referred to her on more than one occasion as "The Woman." Although she only appears in A Scandal in Bohemia, she's mentioned in multiple other Holmes stories. However, Watson says, "It was not that Holmes felt any emotion akin to love for Irene Adler." It was the thrill of being beaten by an adversary, especially a woman, that made Holmes fascinated with her. Guy Ritchie obviously felt this wasn't exciting enough, hence the apparent on-screen shenanigans in this new version.

The other prominent woman in the new movie is Mary Morstan (Kelly Reilly), who is Watson's fiancee. John Rabe, a news anchor on the Los Angeles area NPR station KPCC and a Holmes aficionado, has posted about her appearance:

The only true blunder/liberty I spotted is that in the movie, Watson is engaged to Mary Morstan before Holmes meets her, when of course, in Doyle, they got engaged after a case Holmes solved.

Oh, and that scene in the trailer in which Holmes is handcuffed naked to a hotel bed? We're pretty sure that's not in any of the original stories, either.

Are you a Holmes fan? Have you seen the film? What's accurate, what's not?